Characters like Dick Grayson never seem to be able to catch a break. He’s stuck: not popular enough to be sacred, but too popular to just be allowed to die. I, personally, feel like he should still be Batman, but that ship has now sailed. But, after the latest shake-up to the character in the pages of Forever Evil, we now have Grayson #1, and I have to say that not only was it a lot of fun to read, it also gets a lot of things right. 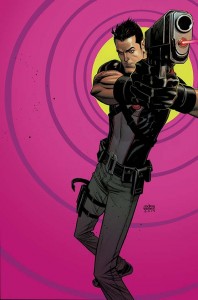 Quick recap: first, in the pages of Forever Evil #1, Dick Grayson is outed to the world as Nightwing, the semi-famous vigilante with ties to Batman. By the end of the event, Dick has been held prisoner, seemingly tortured, “died,” and been revived. At the end of Forever Evil #7, Batman asks Dick to take on a mission which he deems to be “the most dangerous thing” he’s ever asked his young ward to do. Cut to Grayson #1, which, like any good spy story, starts on a train. Russian Intelligence agents are running a game on a guy named Ninel for some unknown reason, and Grayson’s team–an unknown organization–want in on the action. They take out the Russians and knock out the poor mark before Grayson uses some of his signature acrobatics to get both himself and Ninel off the train. Dick is then engaged by a mysterious stranger who turns out to be the Midnighter, most recently of Stormwatch fame. They fight for a bit, and Midnighter takes off just as we find out that Ninel is a kind of mule–carrying some type of illegal technology that can turn him into a living weapon. Grayson uses his cleverness to help Ninel from exploding and the scene ends. Back at headquarters, Grayson and his partner get a pat on the back from a guy with a whirlpool for a face, which is when we find out that Dick has signed on with Spyral, a long standing DC spy group. We get a fleeting moment where we realize that Grayson may not be “working for” Spyral in the strictly traditional sense, we get a hint of a possible love thing between Dick and his partner, and we get a glimpse at the whirlpool face guy being evil, then the issue is over.

I haven’t read much of Tim Seeley’s work before this, but I have to say that I’m impressed. He does a wonderful job of keeping the voices unique while also keeping the whole tone of the book light and fun. This is a James Bond-like story, but before 007 had to get all gritty and flat nosed. Dick Grayson is, of course, a prodigy at everything he does, but it will be interesting to see how his morality makes his new job that much harder. Seeley and co-plotter Tom King have got me very excited about the addition of the Midnighter to this story, also. Since he was originally built to be a pretty transparent analog of Batman, the fight between him and Dick looks like something we’ve seen before, but the dialog tells us that the two have never met before. My favorite line in the whole book is Midnighter’s assessment of Dick’s fighting style, “You fight like jazz.”

Art by Mikel Janin is quite well-suited to Seeley and King’s story and the overall tone of the book. It’s not too heavy, uses some wonderful facial expressions, and can be quite detailed when it needs to be–like one scene in an abandoned nuclear silo. My only problem with the visuals is that it took me a couple of reads to figure out that the blond guy at the beginning of the story was actually Dick Grayson in a wig. I’m sure I read it through too quickly at first, but I also think it would have been better to introduce the character in his normal state and then show him put the wig on. Colorist Jeromy Cox does some inspired color work in this title, as well. While all of the little touches he adds to the book might seem obvious, I’ve seen other books that make much less visual sense than this one. For example, Janin likes to have panels that use an almost anime-like emphasis on an action. Cox takes these panels and carefully chooses different background colors to accentuate the action but also help the reader separate the panels. He also gets downright psychedelic in some panels where the Spyral agents use their “hypnos”–devices that allow them to seemingly hypnotize a person. The overall effect is that, because of the way Cox lays down the colors, none of the panels blend together in a way that makes them difficult to read.

Buy it. I wasn’t following Nightwing before Forever Evil, but I’m definitely a believer with Grayson. There is a very well executed balance of spies and superheroes, fun and intrigue, mystery and action. As I said before, I think the creators are making a lot of the right decisions, and the result is one of the best first issues I’ve read in months. And don’t worry if you haven’t been reading the whole DCU up to now, this title is very new-reader friendly. Check it out.