This is the one I’ve been waiting for. When I was collecting comics in my teens the 2099 universe was in full swing, and while I didn’t get into most of the titles, Spider-Man 2099 was my jam. I always loved the idea that in this future world there was a new Spider-Man–not Peter Parker, bit Miguel O’Hara. So, imagine my excitement when Miguel was scheduled to appear in Superior Spider-Man last year, which only doubled when Marvel announced O’Hara’s own solo series, written by character creator Peter David. Now it’s here, so let’s talk about it, shall we? 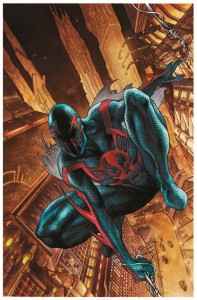 The story begins in very Terminator fashion, with a strange visitor from the future appearing in a flash of light. After crashing a truck and justifying the bodily harm he’s caused as “irrelevant,” he disappears into the night. Cut to Miguel O’Hara, cleverly disguising himself in plain sight as Mike O’Mara, who is apartment hunting. He’s managed to find a building that has an apartment #2099, and it also happens to be the same apartment building where Tempest–a woman Miguel “saved” from muggers back in the pages of Amazing Spider-Man #1–is the super. He takes the apartment, tries to cozy up to Tempest (to no avail) and then dons his blue 2099 Spidey suit for a swing around New York City. At the Alchemax building, the stranger from the future shows up at the front desk asking for Spider-Man–looking like a cross between Iron Man and Bane. He again zaps a guy who is historically insignificant, but spares another whose unborn child will do some really important cancer research in the future. “Iron Bane” tracks down Miguel and sentences him to die for messing with the timeline. We find out that the robo-killer is an agent of a group called TOTEM, the acronym of which I will not repeat because it’s silly, from the year 2211. After appealing to the guy’s logic and reason and having that fail miserably, Spidey and the TOTEM agent slug it out for a page or so. The final few pages include a truly strange deal and double cross between Miguel and the TOTEM guy over letting him kill someone else who works at Alchemax, which seems to springboard things into the next issue.

Overall, the issue is just okay. From a writing standpoint, Peter David has a great grasp on who Miguel is and his voice in dialog and captions, but the coincidences and some of the other plot points are a little off. I’m still not sure if the TOTEM agent was a guy in a suit or a robot, but either way his dialog just doesn’t work. He’s too robotic for a person and too human for a robot, and the contrast is grating. But we’re here for old web head, and David does a great job of not only keeping his voice consistent, but highlighting the difference between this Spidey and the Peter Parker version. I’m hoping that a second issue will smooth out some of the kinks and help the book get into a groove it can live on.

I have really mixed feelings about the art in this book, however. Will Sliney does a great job here with his figures and faces, reminding me of Brian Hitch. While Miguel is in the Spider-Man suit, he looks really great, pulling off some classic poses while maintaining a balanced realism in his physique and facial structure. Unfortunately, we never once get to see Miguel’s eyes. He’s either in the mask or wearing sunglasses through the whole book. I just don’t understand it. Also, Sliney’s panel layouts are nowhere near as dynamic and interesting as I have come to expect from a Spider-Man title. Many panels have characters just standing there in variations of two-shots that don’t really spice up the conversation, and even the fight between the TOTEM agent and Spider-Man is less than thrilling. Color art by Antonio Fabela is another high point in the book, however, as it helps to give the issue a look that is unlike the other Marvel titles I’m reading right now. It’s more grounded in reality than Amazing Spider-Man is and Superior was, while maintaining a colorful palette appropriate for a Spider-Man title.

Wait and See. Being the superfan of Spider-Man 2099 that I am, I will hang on for a couple more issues, hoping that Sliney and David can work out the kinks. However, if you don’t know the character and didn’t fall in love with him in Superior Spider-Man, then you’re probably not going to find much new or exciting here. As I said before, it’s not a bad book, but it’s merely “okay,” and when there are so many other books out there fighting for our attention, “okay” may not be good enough.