Last month in my review of Armor Hunters #1 I stated that I did not feel that the premiere issue of the event was not the best that Valiant had put out. I want to be clear that it does not mean I did not enjoy the issue or think it was bad. It was a solid introduction and provided the proper springboard for the rest of the tie-in issues to jump off. Unity, and X-O Manowar both had stellar tie-in issues, and Armor Hunters #2 picks things up and keeps running. 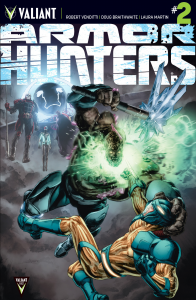 What is so great about this issue is that you really did not need to read Unity or X-O. If you had read the tie-ins then you will get a little more of Armor Hunters #2. Think of Valiant events as a complete outfit. You can get just the shirt and look great. There are also pants, a jacket, a pair of shoes, and a hat you can wear or just mix and match.

Venditti has packed this issue full of awesome as events are heating up between the Hunters and the governments on Earth after Mexico City was effectively wiped off the face of the planet. The pacing for the issue is on point as the urgency of events is felt throughout. Shit is already hitting the fan in only the second issue, and it is only going to increase from here on out. Very early in the issue it is pointed out that if these invaders could just take the armor directly they would have done that. If they want this weapon then they are going to have to come and take it from our cold dead hands.

Braithwaite and Martin do such an amazing job with the entire issue. There are pages that take place in so many different environments, and each has a different look and feel. It is a reflection on the abilities of these two amazing artists. There is depth in every panel that adds real emotion to the characters and the story as a whole.

A solid buy. Valiant knows how to do events. Armor Hunters #2 is hitting its stride and picking up on the action. You do not need to have read the tie-ins so far. If you want more depth behind the Hunters and their motives, and more on what the other members of the Unity team are up to then pick up X-O Manowar and Uniyt respectively.