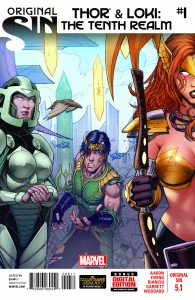 I’m going to come out and admit that I had a review in mind for this issue even before I had read the book. I was curious to check out the book but I was sure that the issue would enrage me by trying to tie Angela in as Loki and Thor’s long-lost sister. Heck, even the thought of it irked me. I was prepared to dislike it and be done with it.

After reading the issue, I have to say that I couldn’t have been more wrong about it. I was pleasantly surprised by the issue and am now looking forward to what comes next in this 5-part mini-series.

I haven’t been following Original Sin at all, so when the issue opened up to stuff that’s been going on elsewhere, I was almost immediately confused and mentally screaming “Uhhhh, what?!” but that feeling quickly dissipated as one of Marvel’s handy dandy Up Til Now guides that filled me in. The abbreviated version is that Thor has a vision through one of the eyes of The Watcher after it exploded. The vision shows Thor that there is a tenth realm that has been hidden away along with his sister. If you followed the previews for this series, this will come as no surprise to you. They haven’t exactly kept this fact secret.

As I mentioned, I fully expected to hate the story that tied Angela into Asgard but I was pretty pleased with the first step taken here. Aaron and Ewing have put their heads together to construct a way to bring Angela into the family without making it feel forced and hokey. I was worried it would feel soap opera-ish or too comic bookey, but I suppose when you try to explain pretty much anything from a comic, it sounds ridiculous regardless so that was a weird thing to be worried about. My point is that despite how the plot may come across when you say it out loud, the story does feel natural and feels like a strong lead-in. It feels like something that I really hope stays in continuity henceforth, although we all know how these things can be.

There are technically two artists doing the interior pages for the books, but that’s not entirely true. Garbett does the bulk of the pencils for the issue and does a pretty good job of representing each character and giving them their distinct look. The colours feel a bit simplistic but you know what? Sometimes that’s all you need in a book and in this case, they really work here. It’s not my favourite colouring job of all-time, but it’s also far from the worst. Simone Bianchi is also credited here for his work on a double page spread that gives us our first look at the tenth realm. His style is noticeably different from the previous pages and really draws the eye to what’s going on as Thor and Loki enter their sister’s world.

VERDICT
Buy it. As mentioned, this book surprised the heck out of me. I enjoyed it quite a bit and while you don’t get a lot of Angela time to start with, I’m really looking forward to seeing how Thor and Angela butt heads for the remaining four issues to follow. Loki is part of the equation here but I really think the main event will be seeing how Thor and Angela get along… after all, the tagline for this series is Hell Hath No Fury Like A Sister Scorned.