I have always been a collector of things. Maybe even a little bit of a hoarder at times. I’ve gotten better and come to terms with the fact that material things aren’t the be all and end all of the world, but there are a few things I can’t seem to part with. I have tons of CDs, DVDs, Blu-rays… heck I even have some VHS tapes kicking around somewhere. I have a ton of books and I have a ton of comics. These are things that I can’t seem to get rid of and things that I can’t seem to convert over to the sole format of digital. I’ve always stood by the physical format strongly and proudly.

Lately though, my stand on material things has begun to waver. After two moves across the country in the span of a year and with another move impending, my boxes and boxes of things are starting to look like more and more of a burden. Why do I love these things so much?

I know I love the smell of a new book and the sound the spine makes when it’s being opened for the first time.

I love the feeling of opening a DVD case and carefully removing the disc without scratching it and putting it into the player to be watched.

I love that my home looks and feels like a home when everything is on a shelf and surrounding me with things I loved enough to spend my hard earned money on.

The times, however, are changing. While I will admit that the nostalgic pros to owning physical copies of things still prevails, the practicality of being able to bring along thousands of books, movies and songs is slowly overcoming all else.

Many people from my generation are in the same boat. We’re the last generation with an attachment to the physical embodiment of our entertainment. Moving onto other things is scary, but it doesn’t have to be. You really just need to be informed of some of the pros that can come along with being part of the Digital Era. So let me turn this article into a list; a list with reasons why you shouldn’t be afraid of change: 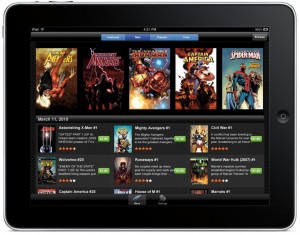 *Obviously some of the stuff concerning ComiXology has changed a bit now that Amazon has bought out the company, but the idea of the app still remain the same and at least to me, it is still my favourite place online to buy digital comics.