It’s always difficult to sit down and write a review of a comic when it is not going to be a positive review. It is something that I always do with trepidation, as I do not enjoy slamming the hard work of others. However, I am here to help you readers decide whether or not you should spend your hard earned money on a particular title. Sadly, I have to say you should give 100th Anniversary Spider-Man a wide pass. 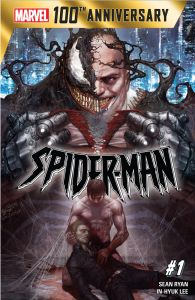 First off the issue throws you right into the climax of a story with very little knowledge on all of the events running up to it. This is intentional and is supposed to mimic the final issue in a long story arc. It is a novel idea and fits the whole joke anniversary gimmick Marvel is playing with, but ultimately we miss out on all the story beats that would pull us in and get us invested into the story. The whole issue felt very generic and mediocre. Peter’s narration after the battle felt too contrived, as if it was just put in the issue to try and establish some sort of validation for the story to be told. If we had the whole story from the beginning it may have delivered the emotional punch it was most likely intended to carry.

The art is another part of the issue that really failed to impress me. You can tell by looking at it that there was a lot of time put into the work. The scenery looks great and everything has a painted look to it. However, the characters in the issue look weird. They are quite static, and look almost flat with arms bent at slightly unnatural angles. The facial expressions remind me of the cheesey faces made by the characters of a fighting game as they yell at their enemies in the story mode cut scenes.

SKIP. Not even a soft buy. 100th Anniversary Spider-Man is just a generic story cashing in on a gimmick. Pick it up in a dollar bin in a few years or on Marvel Unlimited if you really have to read it. There is so much more awesome that came out this week that you can spend your four dollars on.

Also, what was with that helicopter that was chasing Peter across the roof tops? It just nose dives into a building for no reason. Seriously, Peter jumps off a building and instead of continuing straight ahead it just dives to follow him as if it could just fly right through the building.