I have an exciting new Kickstarter to tell you about! Do you like zombies? Of course you do. Do you like genetically enhanced hero hunks? Maybe you do. How about  a good virus induced apocalypse mystery? Yes! Then, read on my friends and I will tell you why this is a Kickstarter worth supporting. 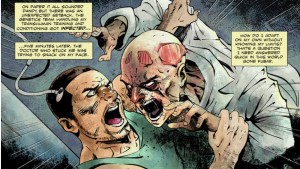 Desolation Day brought the virus down upon the human race, but only the men fell victim to that. After being infected, the men became wild cannibals, tearing through every living thing they could get hold of. While the population eats itself, literally, a soldier named Ruben is trapped inside the military laboratory where he’s just been genetically enhanced as a ‘super soldier’ experiment. He escapes, with no real training or knowledge to handle his new abilities, and sets out to see what’s left of the world.

I know what you’re thinking. This is Y: The Last Man meets The Walking Dead, and you’re right. It’s done well, I promise, and after reading through issue #1, I’m anxious to see more. It’s gritty and bold, quite the impolite zombie tale.  Under The Flesh was originally released as a webcomic, and now writer Gilbert Deltres and artist J.L. Giles would like to bring it to print. Supporting the Kickstarter will pay for Issue #1 to be available in print and for the art of #2.

From the press release: “That’s the world of Under The Flesh. A gritty blast of sex, horror, sci-fi, and dabbling in various sub-themes like evolution, spirituality, and transhumanism. A zombie apocalypse comic that strays away from the traditional viral story by accentuating a premeditated reason behind the virus, as opposed to leaving the origin of the outbreak as a common question mark. “

So, check out the Kickstarter, it’s live right now. Support some talented independent comic book creators and get yourself some sweet zombie swag.

Under The Flesh Kickstarter