Bleach, by Tite Kubo, is the story of a young man named Ichigo and his journey as a Soul Reaper. Volume 1 starts off with Ichigo as a normal high school boy…who can see ghosts. He’s almost always been able to see ghosts, which, with his orange hair and no-nonsense personality, sets him apart from his peers. 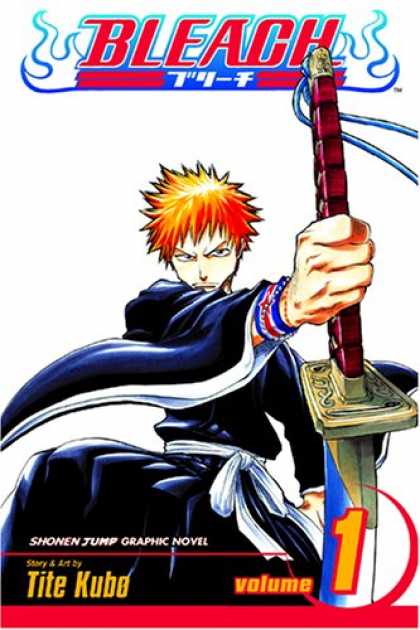 One fateful night, Ichigo meets a Soul Reaper named Rukia. Her job is to guide lost souls to the Soul Society, a peaceful place for souls to rest. Ichigo’s ability to see ghosts lets him see, touch, and communicate with Rukia, who is spiritual in nature. During their first meeting, a Hollow (or, evil spirit that roams the earth eating lost souls) comes after Ichigo’s family. He and Rukia must band together to defeat the Hollow. In the end, Rukia is seriously injured and offers half of her power to Ichigo to get rid of the Hollow. However, Ichigo ends up absorbing all of Rukia’s power and becomes a human-Soul Reaper hybrid.

While Rukia is powerless, Ichigo must take up her duties as a Soul Reaper while also attending school. In the process, Ichigo learns that he cannot discriminate when saving souls. He is determined to protect his friends and family, and (as is the case in most manga) become the strongest he can possibly be.

The early installments of the manga spend time building the cast of characters. In addition to the recently de-powered Rukia, we meet both Orihime and Chad. Orihime is a spacey young woman who is thrown into spirit-conflicts when her deceased brother’s soul shows up as a Hollow and attempts to eat her soul. Chad has a cool parrot that happens to have a soul attached to it. Both of these classmates end up unlocking strange powers within themselves.

The series doesn’t just focus on Ichigo and his roll as a substitute soul reaper in his hometown. He and his comrades discover their hidden soul powers as they travel to strange places to rescue friends and the world. Tite Kubo has done some serious long-term planning with this series, and it shows as multiple arcs are woven together.

Bleach can be daunting, especially for new readers. With over 500 issues of manga, over 10 years of publication, 360+ anime episodes, 4 movies, and a huge fanbase, Bleach is one of the most successful manga series to be published in recent history. For new readers, go slow and enjoy the story. Don’t think you can catch up over night.

Bleach is published by VIZ Manga. New issues are available in Weekly Shonen Jump. Print and digital volumes of Bleach can be purchased through VIZ’s website. Print volumes are often available in bookstores and local libraries. Also, the first opening song to the anime is one of my all-time favorite openings.

Also, this is another great opening.