I’d never heard of The Guardians of the Galaxy before Marvel Studios made the announcement that they would be the odd-man-out title in their second wave of films, and I remember thinking, “They’re really going to have to sell me on this one.” Marvel’s been working hard since then to do just that, most successfully with the superb Guardians of the Galaxy comic written by Brian Michael Bendis and drawn by a rotating cast including Sara Pichelli and Steve McNiven. But, as the film approaches, The House of Ideas is ramping things up, and this week we have several Guardians related offerings. The one in my purview is the awkwardly titled Legendary Star-Lord. Fortunately, despite that familiar feeling of skepticism, Star-Lord is a solid read with a lot of heart and a lot of fun. 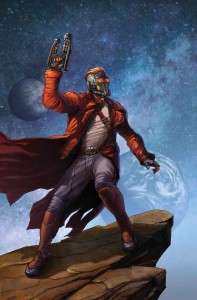 The story begins with a young Peter Quill standing over his mother’s grave, daydreaming of the stars. We quickly meet the grown up Peter, the Star-Lord, where we so often find him: on the wrong end of a laser gun. He’s having a stand off with some Badoon thugs in an orphanage somewhere in space. He’s captured after a moderate dose of exposition and whisked away to be sold to a bounty hunter named Mr. Knife. Unfortunately for the Badoon, they didn’t frisk him very well. Quill first takes a few moments to call Kitty Pride back on Earth for a little pillow talk before breaking out of his cell and eventually the ship. He returns to the orphanage to patch things up and then heads off, apparently to confront Thanos himself. But, before he can get too far, he’s held up by a member of the Spartax royal guard, who might also be something else to the wandering swashbuckler.

The story reads a lot like what one might expect from the solo adventures of one Han Solo, just without the Wookie. Which brings me around to my only problem with the book thus far: Peter has no sidekick–no one to talk to. This leaves him in a couple of scenes talking to himself in order to get all of the exposition out. Hopefully, future issues will have less of this problem to deal with, but since this is the first, there is a fair amount of information to impart on any potential new readers. I feel like it could have been handled more elegantly, but Sam Humphries does a passable job, and makes up for any awkwardness in Peter’s swaggering dialog. I have yet to find a book written by Humphries that I’ve been able to connect with, but this might just be the one. It’s definitely worth picking up the second issue to find out.

Paco Medina’s style is just what I was hoping for from this title. He’s been doing great work off and on over at the current Nova title, and here his style is close enough to Sara Pitchelli and Steve McNiven that it serves to connect this title with the rest of the Guardians universe. It makes me wish that Marvel would call Medina when they have Guardians pages to fill instead of the patchwork of artists that they’ve been using in the last couple of issues. David Curiel, also, does wonderful work in this issue capturing the bright colors and glossy shine that most of Marvel’s space titles are sporting right now. He also does a great job of creating a palette for the flashbacks on Earth that keeps everything separate but is not so different as to take the reader out of the story.

Buy it. I’m not usually one for crossovers, tie-ins, or spin-offs, but Legendary Star-Lord is a seriously fun story that gives us a little more insight into the titular character without falling too far into tropes or camp. If they can get the exposition under control, this will be a great read to get even the Guardians novice ready for the upcoming film.