It’s summertime, and in the case of movies, that means explosive big-budget tentpole films are dominating the box office.  Widescreen action, planet-sized stakes, and more explosions than you can shake a stick at all find themselves the kings of this fun-loving timeframe; and over the years comics have also claimed these months to showcase big events of their own.  But where most of these storylines take place over multiple titles in ‘Event’ formatting, Earth 2 has decided to go it alone, providing the same larger than life stakes and hyper-ratcheted action one would expect, but all confined within the pages of its own title. 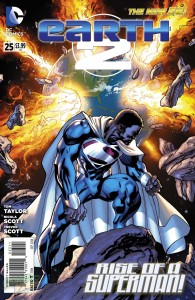 With a battallion of Parademons hot on their trail after the successful prison break of Flash, Green Lantern and Hawkgirl try a desperate gambit to survive the ramifications of their minimalist plan.  Meanwhile, the true terror of this title, a Darkseid-controlled Superman hatches his most nefarious ploy yet: by making really awkward conversation at a dinner party.  Luckily for him, a backup plan was in place, as the planet-sized boom tube technology has been completed and activated, pulling Earth 2 towards it in order to replace the dying Apokolips for Darkseid.  Can the ragtag heroes of Earth 2 set aside their differences before it is too late?  And can the pascifist Val-Zod make peace with his decision of non-violence as the world around him plunges into darkness?

That recap should give you a good feeling of what Tom Taylor and Nicola Scott have been building towards since taking over the title a few months ago.  Grand in scale and cast, it has been a non-stop escalation of drama and action building to this week’s climax.  With that said, Taylor appears to be channeling a bit more of his Injustice style by including a surprising amount of both character and humor driven moments throughout this issue to balance things out.  Between a succinct yet satisfying origin for the newly created Val-Zod, the humorous interactions of Jimmy Olsen as he tries to make something out of all of these ‘heroes’ that surround him, and the surprising turn of Superman’s demeanor through the issue; one would expect this issue to be a case of disjointed whiplash as we are tossed from tone to tone.  But in all honesty, that seems to be Taylor and Scott’s strong suite, tying these disparate tones together to form a cohesive story that incorporates each tonal element instead of brutally smashing parts together, and it does wonders in creating what feels like a living setting of its own.

That is not to say the issue is without fault; as the large cast, plot, and against-grain archetypes would likely be rather daunting for a new reader to come into.  I personally see that as the price of entry to get large-form stories without a crossover, but it does act as a bar for newcomers who may be scared off by so many moving parts.  Timing may also play a part in it, but I was also a little surprised by the interactions of Ma Kent in this issue.  Considering how quickly a lot of these things have taken place in story it could easily be written off as shock, but it does read as a little outside of her demeanor without taking that into context.

In the context of art though, Nicola Scott still dazzles with pages that encapsulate the grand scope of the story without swallowing up the characters in the process.  Balance, much like in the dialogue aspect I praised earlier, is a key part of her success in this endeavor (but sheer talent doesn’t hurt either).  With pages that are clearly meant to impress, it is the effortless nature of their usage that keeps the title from being nothing more than an art showcase.  It’s a humble bombasticism (I’m making it a word), and it works in this type of storytelling to elevate and ground the story simultaneously through the detail oriented care she has put into the setting itself.

Buy (this arc)!  You may not know it from above (he said sarcastically), but I quite enjoy the audacity that radiates from the Earth 2 title.  With a storyline to rival the Events of today, it’s a setting of its own that is willing to take that one extra step beyond safe to keep things intriguing.  Besides, who said enjoying a big screen experience during these summer months was reserved only for the theatre?