Here we are at the penultimate issue of Peter Panzerfaust. It has been a rather tumultuous adventure as the series was critically acclaimed, but it had some trouble getting the sales to get it off the ground. It was a passion project for the creators, so Image gave Wiebe and Jenkins the go ahead to continue and finish out the series. For those fans that have stuck by the series since the start, it really feels like everything is paying off. 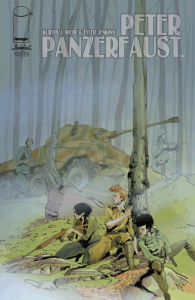 Issue #19 is an emotional issue (much like most of the others) told through two of Tiger Lily’s journal entries. One is from 1942 around the time of the events in the issue, and the other is from after the war in 1946.  Tiger Lily came to the realization that she had to live her life a different way, and that turning point is further emphasized by the use of two distinct entries into here journal. I’ve like Tiger Lily for a while, and it is nice to get to know her more.

While Tiger Lily’s emotional journey ties the issue up with a nice little bow, we get to see Peter back in action. I could be entirely mistaken, but I believe this is the first time we hear another character refer to him as Peter Panzerfaust. Appropriately enough, the fight is against a platoon of SS Panzer Grenadiers and two Panzer III’s. Peter has shown some incredible bravery and luck throughout the series, but he truly earns the name. (For those that may not be in the know, the panzerfaust was an anti-tank weapon used by the Germans during World War II.)

Jenkins’s art is also in some of its highest form this issue. It has been over two and a half months since the last issue, so the extra time between issues has paid off. I miss Heather Breckels colors, but Fitzpatrick has been doing a stellar job on colors since she left. She has a different style, but still captures the tone and spirit that has been present throughout the series. These last few issues have looked great, and we can thank Kelly Fitzpatrick for contributing to that.

Look, if you made it to issue #18, then you should obviously BUY issue #19 of Peter Panzerfaust. The only excuse I can think of for not picking up this issue is if you are waiting for the second volume hardback. Even then, do you really want to wait?