Battle Royale is a cult classic that continues to be a relevant commentary on the violence innate in childhood. The novel by Koushun Takami shocked audiences by showing young teens in an adult manner. These teens are forced to kill or be killed in a sick, twisted game designed by the government to instill fear in a population. In watching their youth succumb to the disease that is fear, the country as a whole continues to bow to the wishes of a dictatorship. 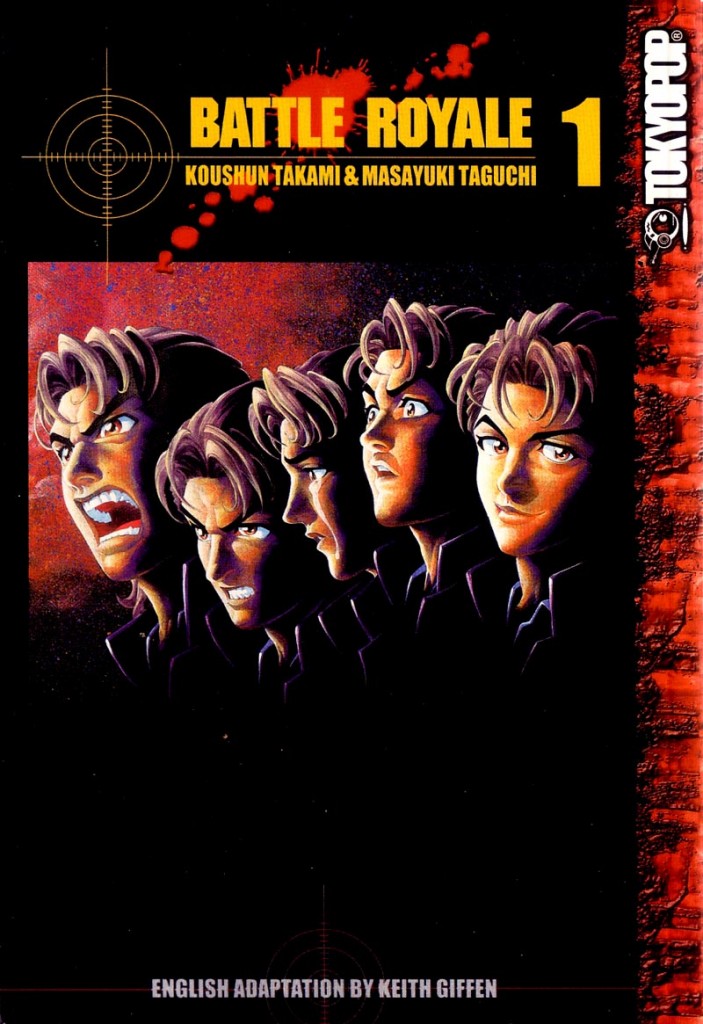 Battle Royale takes place in a near-future Japan. The country is run under a powerful dictatorship that crushes any hint of rebellion. As part of their control, the government selects a class of third year junior high students (ages 14-16) to participate in the Program. The stated goal of the Program is to study the effects of certain weapons to determine their effectiveness in war. The lack of a mandatory draft into the armed forces is their reason for using children. Their real reason is to display their control over the people and keep them all afraid.

Takami’s story has been translated into several languages, made into a movie, been studied, and adapted into a manga series from TokyoPOP. The manga runs 15 volumes and was drawn by Masayuki Taguchi. The manga does take some liberties in the retelling – namely, it is more sexually explicit than the novel. However, the visuals of the manga drives home the violence of the story.

The novel version of Battle Royale describes in detail the horrific deaths of each of the children in the class. Brains spill, guts rupture, eyeballs pop, muscles give out…Takami refuses to tone down the violence of the Program. Taguchi’s illustrations are no exception. He does not shy away from showing the innards of a student that you were rooting for. Additionally, Taguchi weaves sexuality of teens into the visuals, from Noriko’s blushing to Mitsuko’s raping of a dying teenage boy. Oh, and panty shots galore.

What stands out most about the artwork of Battle Royale is Taguchi’s ability to show Takami’s characters as unique people. In the narrative, Takami described the personalities and physical presence of each student. Taguchi took those descriptions and brought each of the 42 students to life. What’s more is the diversity of bodies Taguchi shows in the class. There are artists who draw the same face for each character, mixing it up only with hair and clothes. Taguchi shows off his artistic prowess by giving each student unique facial features and presence. Each student reacts to the violence in different ways, from the cold and calculating Kiriyama to the hapless Yutaka.

The Battle Royale manga is not for the light of heart. The deaths are detailed, the sex is often disturbing, and the hopeless situation of the students is enough to bring every reader into a pit of despair. However, Battle Royale is an addictive series that leaves you wanting more.