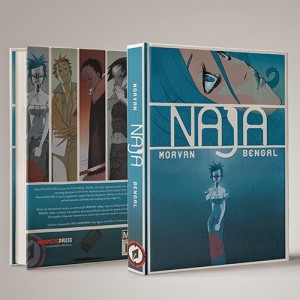 Before I even get to an actual, proper review, let me just start by saying wow. Wow, wow, wow. What an incredible book by JD Morvan and Bengal. Wow. I’ve admittedly never heard of either creator until I read Naja, but I can promise you that these two are on my radar now.

Naja is a book about an assassin who literally doesn’t feel pain, emotionally or physically. She works for a man that she’s never met that goes by the name Zero and she’s third on his go-to killer list.

The story varies in perspective but ultimately this book, as the title would lead you to believe, is Naja’s. It’s narrated by a mysterious third person; someone who has insight in Naja’s life and the lives of the people around her, unknowingly. So I guess the book shifts focus rather than perspective but it works really, really well. The narration intentionally keeps a lot under wraps and steers the story into a fantastically interesting direction.

The book almost feels a bit like a written adaptation of Kill Bill at times. Naja’s real name is beeped out of the story, like The Bride’s for a large chunk of the story. But instead of it feeling similar to her character from the Quentin Tarantino movies, it feels more like an extension of O-ren Ishii’s tale, specifically her origin story.

The artist on this book is Bengal. Again, I have no prior knowledge of his work, but it is pretty freaking incredible. His style is very much an adapted manga style with a very unique look. The line art is stunning and Bengal excels at showing a wide range of emotions (and/or indifference) on the faces of his characters. The action sequences in the book feel vivid and fluid and work exceptionally well with Morvan’s words to really bring the story to life. Then there are the colours… oh man, this is honestly just such a beautiful book and if it had been in black and white, Bengal’s art would still be exceptional but the colours are part of what really gives this book life. SO. AMAZING.

JD Morvan doesn’t really tell this story with a ton of dialogue. As I mentioned, we’re being told the story by a mysterious third party who has a whole lot of information on all of the players. We don’t know how the narrator is connected to the story and we don’t know what his intentions are towards them, but it doesn’t matter. Despite his part in the story, it’s mostly told with seemingly no bias as the book works craftily towards the climax. You find yourself falling further and further down the rabbit hole the more you read and just become enveloped in what’s going on. The characters all have their own motives and each play an important part in the tale, no one feels like a wasted addition.

VERDICT
Buy it. Naja was an excellent read that I enjoyed from start to finish. It has about 250 pages, give or take and it isn’t something that you’ll just flip through and be done with. It has lots of meat on its bones for you to eat and digest.

Everything about this book is worth checking out, so make sure that you do it.