Superman #32 is one the biggest releases of the week, and probably one of the most anticipated DC books to be released this year. The attention the issue is getting stems from the new creative team that sees not only comic legend Geoff Johns coming on board, but long-time Marvel artist John Romita Jr on pencils. This may have upset some die-hard Marvel fans, but there are also those on the DC side of the fence that are not fans of Romita Jr’s style. 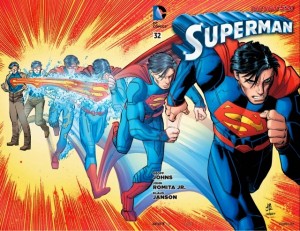 As this is one of the major points of contention that consumed fan reaction to the announcement of the creative series, I think it is only wise to start with the art. Personally, I have never been crazy with Romita’s art style, but given the right story it has its place. In Superman #32 it is a breath of fresh air. Following the relaunch of DC’s New 52 there has been a streamlined look to many of their more well-known titles and heroes; a serious look for a serious and grim world. The art that is presented in this issue however is one that varies from what we have seen in Superman titles since the 2011 relaunch. Romita’s signature line-shading is still ever present, but Janson and Martin help to dilute it. The over-all tone feels much lighter than what we’ve typically seen. Just from the art alone I got the feeling that we are in for a little bit of fun and maybe a twist of some of the classic science fiction elements of the Superman titles of old.

Geoff Johns delivers a story that is something new and totally accessible to new readers. It is reminiscent of his past work with Superman in Action Comics. Johns is typically known for the telling stories that capture the spirit and heart of a character, and putting titles on a new course that helps them to grow and be successful. We are only one issue in, but it looks like Superman is returning to a form we have not seen in a few years.

BUY IT! Superman #32 offers up something new and fun. This is not a rehashed story adjusted for the new 52, but something entirely new. Romita’s art may not be to everyone’s taste, but I feel that it works here. It is a step away from the more streamlined DC look.