Life’s never been so hard for Haruhi. A scholarship student at a prestigious high school, Ouran High School, full of rich and powerful teenagers. Haruhi gets mixed up in their affairs when she breaks an expensive vase at that belongs to the school’s host club. In order to pay for the broken vase, she agrees to work for the host club, and she is eventually talked into becoming a full-fledged host. 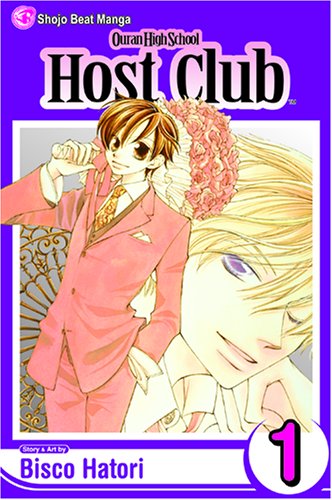 Though her laid-back appearance and lack of gendered uniform screams male, Haruhi is very much a woman. The members of the host club make this major mistake early on in Haruhi’s tenure as a servant to the club, and they decide to continue deceiving patrons of the club to maximize on Haruhi’s gentleness and appeal to the female students.

For those unfamiliar with the concept, a host club is a group of attractive young men who entertain women who solicit their skills. Think geishas, but men and modern. They work in clubs, and their primary services include flirting with patrons, making sure their drinks are full, and telling stories. Hostess clubs work in the same manner, only with women performing the services. The host club at Ouran was founded by their president, Tamaki, the mostly princely student in the whole school. Together with the most attractive male students, Tamaki and the host club members perform some of the most ridiculous stunts to win the hearts of every girl at school.

At first glance, Haruhi doesn’t fit the look of the club at all. Yes, she looks just like a guy – messy, short hair, oversized glasses, hand-me-down men’s clothes instead of a uniform. Her mannerisms are man-like, and she makes no attempt to correct the host club’s mistake. Haruhi accepts the makeover to be more appealing to women without any complaints. To Haruhi, the situation she’s in would just be easier if she went along with their assumptions and acted as a male student. This is the core of the shojo heroine appeal of Haruhi – while many shojo women embrace their femininity, Haruhi is more agender than most other shojo manga characters. She’s resistant to the host club’s antics, doesn’t mind flirting with women, and doesn’t care about her appearance.

Much of the plot of the series focuses on comedy and growing the strength between members of the host club. The host club uses their resources to plan elaborate parties with no grounding in reality (and Haruhi makes sure to point this out to the reader), leading to adventures in jungles, on the beach, and beyond. The members of the club also embrace comedic elements of shojo manga to maximize their appeal to the student body, from tsundere to incest to shota.

The growth between the characters centers around Haruhi, who is the wild card in their group. As a poor student, Haruhi has a much different life than these children of old and powerful families. For the most part, they are anxious to try things from the “commoner’s” world, like instant coffee and playground games. Through these experiences, new feelings and old beliefs surface as the club members work through their own issues.

Ouran High School Host Club by Bisco Hatori is 18 volumes long, and there is an anime based on part of the manga. It is a series written with a female audience in mind, and the focus is on the situational comedy of Haruhi’s position as well as the crush some of the members develop on her. Ouran also does a great job of exploring gender roles – Haruhi spends most of her time acting as a guy, the host club members cross-dress when it works to their benefit, and Haruhi’s father becomes a transgender woman to fill the hole left by Haruhi’s mother when she died. This kind of gender play without taking itself too seriously is refreshing to read. Be sure to check out this classic shojo series!