Kill Shakespeare: The Mask of Night #1

Art by Andy Belanger (with Ink Assist by Adam Gorham )

The Mask of Night is third in the Kill Shakespeare series. It is a series I am unfamiliar with, but sometimes when you see a new number one issue you pick it up and give it a try. I had hopes that a first issue would be welcoming to new readers, but I was instantly lost. 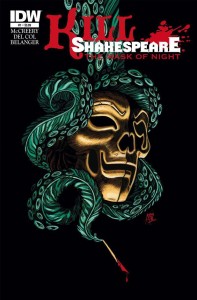 It is rather hard to review a story that I could not follow, but perhaps that is major fault of the issue. I felt that there was so much knowledge I lacked to properly follow and enjoy the issue. Couple that with the heavy Shakespearean language and it can be a chore to sort out and decipher what was going on. There were times I was wondering, am I not understanding because of a lack of understanding the old vernacular, or just not know what the hell happened prior to this issue.

Unfortunately, the art did very little to soothe my irritation with the story. It felt lacking in polish, and to be blunt, rather amateur.

A very solid don’t buy.I found almost no enjoyment in this issue. As a new reader I was lost, and left with a sour taste in my mouth. Nothing reached out and made me feel compelled to further invest in this series or the others in the Kill Shakespeare world.