I don’t know about the rest of you, but when any form of entertainment can cause me to physically pull back my fist and let out an ‘Oorah!’ due to it’s climax; I call that a win.  If after that rush of excitement, you can look at what has happened and realize it was just the buildup to the actual climax of the story you have been following; well that is just icing on an already damn tasty cake.  While it may seem like glowing praise, this is par for the course in the Wonder Woman series, as it continues its roller coaster ride of ups and downs in this week’s issue 32. 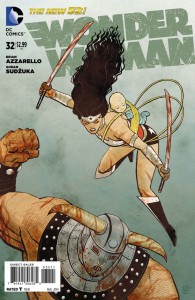 The battle lines have been drawn.  As the desegregated armies of Themiscyra prepare for war alongside their Olympian allies, Wonder Woman must figure out how to best lead her people against the First Born and his forces while protecting those under her care.  Sending an unlikely team to find their missing friends, the first blows of the war are struck when the opposing generals find themselves face to face once more.  But with Diana’s previous scuffles falling clearly in favor of the First Born of Zeus, can the surprise return of everyone’s favorite New God be enough to turn the tide of battle?

If you haven’t figured it out, I absolutely adore this title when it is hitting on all cylinders.  So I will try my best to be objective, but for all intents and purposes there is very little to criticize, making my objectivity all the more difficult.  What works in this particular issue are many of the same strengths that have made the previous chapters of Azzarello’s run so strong.  Snappy and clever dialogue full of layered doublespeak, a well-delivered ambiguity of motivations fueling the melodrama with its shifting alliances, and at the center of this chaotic maelstrom of epic proportions?  Wonder Woman simply attempting to honor her promise to protect a woman and her son.  This issue escalates each of those aspects to the N’th degree as the ending of their run looms ever closer, and as the insane cast of colorful characters all start coming together, it builds the story into a fervor that had me clamoring for the next issue.

It’s weaknesses?  I would be hard-pressed to recommend this issue to a new reader.  Honestly, I would have a hard time finding a solid entry point anywhere other than the beginning of the run that would not cheapen the grander tale.  With the plot stretching across all 32 issues to date, and a cast so large that it may take a few introductory issues to get acquainted, this is not a light hop-on title in my opinion.  In a similar vein, Wonder Woman can find herself in the background as the larger scale conflicts that surround her take center stage.  This issue helped reverse that trend, but with so many groups to follow, Wonder Woman still only held the spotlight for around half the title.  That being said, each of these supporting characters are part of her world (sans one from a Fourth World), and indirectly help build upon the character of Diana and her environment.  If an ensemble cast is not what you are looking for though, this is not the run that is aimed at you.

Goran Sudzuku steps in for Cliff Chiang again this issue, and does a splendid job of matching the artistic tone set by the latter without abandoning his own flourishes.  The action sequences felt grand in scale, which is an absolute must in a battle between gods and demigods, but maintained the expressive human features as motivations were laid to bare mid-fight.  Meanwhile, with the majority of the issue falling into the realm of planning and conversing, not once did I get the feeling of talking heads.  Sure, it helps to have backdrops such as Hell or the other demiplanes of the gods to keep things interesting, but the framing of each scene made sure that there was more to each panel than just two people talking.  It’s a deceptively little thing, but one that really separates the great from the good issues in this series that relies so heavily on dialogue.

Buy!  With the caveat of ‘if you are mildly aware of what has happened to date’.  An excellent chapter in a larger story, issue #32 continues to escalate and excite towards what looks to be an explosive ending.