Winterworld is based on the 1987 miniseries of the same name created by Chuck Dixon and Jorge Zaffino. Unfortunately, I was not aware of this at all until I had finished this issue, but fortunately, previous knowledge of this world is not needed to follow the story in the new Winterworld #1. The story takes place in a post apocalyptic world that is covered in snow and ice, and follows two companions, Scully and Wynn, as they search for Wynn’s parents. 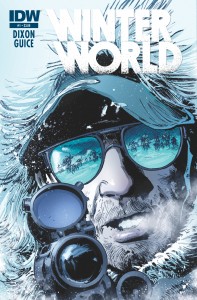 The reasons for a world stuck in perma-winter are not explained, and after reading a letter from Dixon in the back of the issue they probably will not be explained in detail if at all. (Dixon wants to keep politics out of the story.) That is fine by me, and it is clear that this story is more about the relationship between the two main characters. Dixon provides a lot of dialog between Scully and Wynn, and I can tell that the two are close and have different outlooks on the world that they live in. Wynn appears to be a dreamer fascinated by books and the stories within. In a world that requires constant scavenging for food and supplies, this interest of hers doesn’t seem too practical. Scully, on the other hand, is constantly aware of what is needed to survive.

It is obvious in the issue that the two characters complement each other, and there is enough there to give us an understanding as to what kind of people they are. However, their motive is lacking. We know they are looking for Wynn’s parents, but beyond that we do not have the “why.” It is for this reason that I found myself not really caring about the characters by the end of the issue. I know a little about their personality and the type of people they may be, but I do not know what motivates them. I understand that motive is something that can be revealed in full in later issues, but there should be some hints or clues to entice the reader to delve further into the story.

Guice’s art and Rodriguez’s colors were the best parts of the issue. There was rawness in the art that sold the ruggedness of the winter wilderness. It showed that life is tough and the elements and nature can be even tougher.

For me Winterworld is a very soft-buy/ could pass for now. The world and the art were interesting, and Dixon really showed that there is a strong connection between the two characters. Although, I did not find myself really caring for either of them by the time the issue was finished. It’s a shame, because I loved Dixon’s run on Robin (He also created Stephanie Brown aka The Spoiler). If this is a title that does interest you, and you have not read the original series, then I think you will be okay checking it out. I’ve been cutting a lot of books for monetary issues now, so I doubt I’ll picking up issue #2. A book needs to scream at me in the first issue. If IDW does a 99-cent sale down the line, I’ll give it a look.