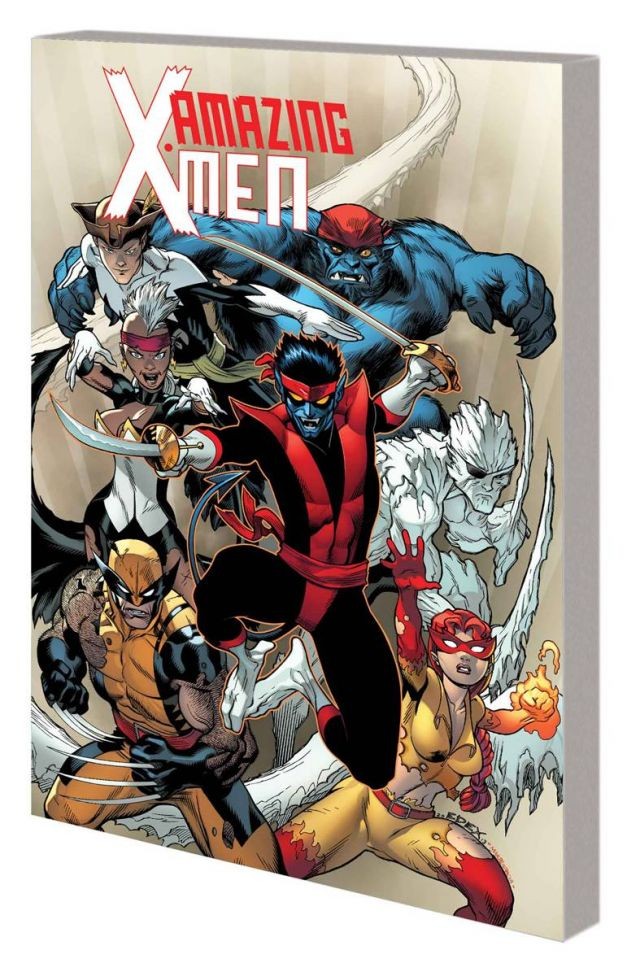 When Nightcrawler was killed during the Second Coming storyline in 2010, his absence was greatly felt by characters and readers alike. Nightcrawler is an unique character in comics – beneath his devilish appearance is devout man of God. His death hit the X-Men hard, especially Wolverine.

Amazing X-Men brings Nightcrawler back to the forefront of readers’ minds. Nightcrawler is in heaven, a paradise he’s longed for his whole life. However, Kurt is unhappy. Despite his life devoted to God, he cannot stand back and enjoy the happiness of the afterlife. While there are always unfinished business when a person dies, Kurt’s situation is a little different. Azazel, Kurt’s father of ill repute, shows up in heaven to steal souls for his pirate army.

Oh yeah. There be pirates in heaven and hell.

The X-Men come into the picture when the Bamfs build a machine and teleport them to various places in heaven and hell. With the help of Kurt and the Bamfs, the X-Men battle Azazel and his army of demons on pirate ships in heaven, hell, and purgatory. As Kurt says time and time again, “One of the great tragedies of life is that we don’t get to choose our family.”

The biggest draw to the first arc of Amazing X-Men is the emotional energy Aaron and McGuinness put into the moment when each of the X-Men see Kurt for the first time. Storm, Iceman, Firestar, Beast, Northstar, and Wolverine each get their turn to be reunited with the blue elf. Not only that, Aaron even explains the origin and purpose of the little Bamfs that have been plaguing the Jean Grey School for Higher Learning.

Fans of Wolverine and the X-Men will enjoy the tone of the series – fun, humorous approach to the X-Men. I mean, a series with a pirate ship manned by X-Men won’t take itself too seriously. Interspersed in these funny moments are family reunions, violence, and sadness. Aaron’s talent as a writer shines through in this new X-Men series.

For long-time fans and new readers to the series, Amazing X-Men has everything you want. Action, adventure, emotion, humor, and superheroes. The first volume contains the first six issues of the series and help to reintroduce Nightcrawler to the post-AvX world.