A from-the-trenches report by Bob Reyer

This inaugural NYCC Special Edition show, launched by ReedPOP, the company behind the October New York Comic-Con,  was an attempt to stage an “old-timey”,  pure comics convention focused on the books and their creators as opposed to the multi-media spectaculars we’ve come to see as the normal way of things. As someone whose convention-going began in the days of shows held in hotel ballrooms lined with card tables piled high with books and artists working the room, I’d say that they succeeded, as this Special Edition seemed more like a “re-print” of those marvelous days, quite accurately recapturing the fan-ish spirit of the old days, whilst also expanding the parameters in terms of how many amazing creators could be packed into one (albeit large) room. So as announcer Bob Murphy used to say after a New York Mets win, “Let’s go to the happy re-cap!” 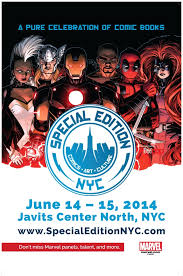 Saturday began differently than the opening day of the larger NYCC, as instead of a massed horde of soon-to-be attendees and cos-players excitedly making their way across midtown Manhattan to get to the river-side Jacob Javitz Center, there were just a few gaggles of folks heading to the west. Once at the site, there was quite a goodly number assembled, obviously eager to make contact with their favorite creators for autographs, prints and other goodies, as well as fill some of their comics want-lists from the large vendors area, so obviously the show’s promoters were hitting the intended mark quite well with that section of their mailing list!

When the show commenced, as Steve and I were in the middle of the throng, we were witness to them spreading out to all corners of the combination comics flea market/Artist Alley, so as Mr. Seigh had only one day to secure some great content for you folks out in radio-land, we rushed to our first stop, hoping to be the front runners. We discovered about two dozen fans already queued up for Gail Simone (I’ve obviously lost a step in my old age!), but as the line grew behind us, we decided to stick it out, which turned out to be the right choice, as the crowd was always constant, if ever shifting. Ms. Simone and her husband Scott did a great job keeping things moving forward, whilst still providing each person a chance for a conversation; not an easy juggling act! It being hard not to eavesdrop, I overheard many fans relating emotional stories of how Oracle or Batgirl inspired them, or how other works by Ms. Simone affected their lives, much reminiscent of the Carol Corps and Kelly Sue DeConnick at last year’s NYCC. When we reached the table, I purchased the trade of Red Sonja, and secured signatures on The Movement #1 and Birds of Prey #108 (the final issue of that first series) whilst getting to have a lovely chat about two of my all-time  favorite comics. More importantly, and to my great thrill, Ms. Simone graciously agreed to a interview that you’ll hopefully be hearing very soon! 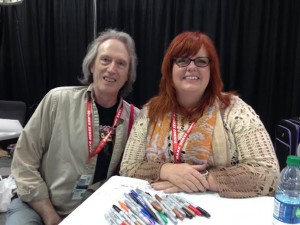 (Photo by Carolyn Cocca; thanks, Professor!)

From there, we went over to see Michael and Laura Allred, who also had quite a crowd assembled, and engaged in a good conversation. A little later, we attended a panel spotlighting the works of this fabulous couple on books such as the long-running Madman and the new Silver Surfer. As an aside, and not to sound like Joan Rivers, but a very cool fashion choice by Mr. Allred, who was sporting a kilt for that first day! (On Sunday, I’d return and ask the Allreds sign my promo poster for Matt Fraction’s FF,  which will proudly hang in “The Archives” next to a poster of the Jack Kirby cover to Fantastic Four #1.) 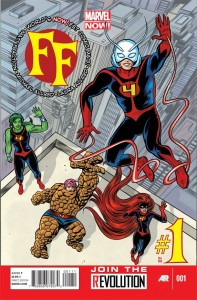 We then made our way to Steve’s  interview with the charming and talented Jenny Frison, the main cover artist for Red Sonja, 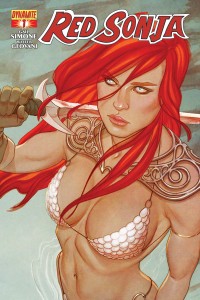 which was great luck for me as I had her sign the TPB collection that I just picked up–I’m claiming double bonus points for that! Next was the Allreds spotlight, and we hung through into the “Marvel’s Next Big Thing” event, from which Steve tweeted the news items you may have seen. although he didn’t tell you about the possible “Squirrel Girl, Hercules, Ghost Rider and The Creep; they could be the new FF” rumor started by Peter David! After some very quick rounds, I headed back for a discussion entitled “Re-imagining the Female Hero” with Emanuela Lupacchino, Jenny Frison, Amy Reeder (Rocket Girl), Gail Simone, and Marguerite Bennett, the writer of the fabulous Lois Lane one-shot. that was my “Book of the Week” on its release. The panelists had many interesting points to make on their favorite characters past and present, and in the ways that industry can marginalize some super-heroines due to the tie-in nature of characters such as Supergirl. There was also a very humorous but telling anecdote about a similar panel that also featured Amanda Conner which became a dissertation amongst the female artists about the proper way to display a super-heroine’s “attributes”!

We then proceeded to our interview with Ms.Simone, who had found a crowd awaiting her nearly as long as the morning’s! With un-needed apologies to us, and a grand “the show must go on” feeling, Scott and Gail worked the line like maestre, and we snuck in our chat without unduly affecting those who were so patient. (Brava to our hosts!) After some more shopping (my lips are sealed!), we left the show, had a quick nosh of some spectacular grilled cheese sandwiches from the booth of Mrs. D’s Kitchen in Greeley Square, and headed home. (Leaving the train at our station, this was the conductor’s announcement: “This is Ronkonkoma, the final stop. Have a nice evening everyone, and please get home safely. To the person who threw up in Car #6, thanks for nothing.”  Awesome!)

Sunday early would be my time to look for book deals and check in with some creators such as Kevin Maguire (Worlds’ Finest —when I was loving it!),  Amy Reeder and Brandon Montclare (hope you’re feeling better Amy!), and Peter David (X-Factor has some cool things coming up, I’m told!). I then was able to meet for the first time Geof Darrow, the artist behind Big Guy & Rusty the Boy Robot, who not only signed my copy, but sketched a great monster for me while we discussed dinosaurs, Godzilla, and old “creature features” such as Beast from 20,000 Fathoms and Gorgo. I then met up with my friend and Talking Comics contributor Carolyn Cocca, and we ambled off to attend a “Batman 75th Anniversary” panel featuring Gail Simone, James Tynion IV, Greg Pak, and Francis Manapul. Topics ranged from “Favorite Moments” from the comics and films, discussions about the new “Gotham” TV show and the on-stage creators up-coming story-lines, and then audience questions, two of which back-to-back drew some nice laughs, thanks to the responses of DC marketing VP John Cunningham:

Q: With the events in the aftermath of “Death of the Family”, and considering how important he is to the Batman Universe, will we be seeing more of The Joker?

A: What a wonderful question–next!

Q: What are the plans for Carrie Kelly moving forward?

From there back to the show floor and a chat with the ladies of The Mary Sue website, plus an afternoon’s power-shopping for some artsy items (one that I’ll be discussing this week–sssshhh, don’t tell Stephanie!) and old TPBs (with some chats with fans doing the same, one on the current state of Wonder Woman), before power-walking back across the vast Javitz lobby to see the “75 Years of Marvel” panel, at which Senior “X-editor” Nick Lowe presided, but which Chris Claremont and Peter David claimed as their own, to the delight of the audience. They offered up opinions on their first Marvel comic–the oft-mentioned-around-here Fantastic Four #48–#50 for Mr. Claremont (“..and three years later I was working for Stan!”), for Mr. David, “The Wedding of Sue and Reed” in Fantastic Four Annual #3 (“…and all the super-villains were apparently invited, too!)–as well as the expected favorite artists, characters and such, but we alson heard Mr. Claremont’s  take on the modern version of Cyclops (“…maybe he’s hanging out with Emma too much!”) and this from Mr. David: “You know, twenty years ago I was writing two books, X-Factor and Spider-Man 2099. Today, I’m writing two books–X-Factor and Spider-Man 2099; that’s either great, or I think I might be in a rut!” After that, Ms. Cocca and I went back for a last round of shopping, before a “Thank You” visit to Gail Simone, and my last-second successful effort to have the Allreds sign my FF poster.

I certainly hope that ReedPop will consider doing another of these Special Editions, because the vibe of this show was unique in that it reminded me so much of the smaller shows I used to frequent, not only in that the focus of the show was on comics and the access to the creative folks behind them, but in the sort of visitors attracted. The women and men (and lots of kids, too!) who attended were either veterans such as your Cranky Old Uncle Bob or people new to the hobby who seemed eager to embrace its history;  even the cos-players, although fewer in number than at the bigger NYCC, they certainly stepped up their game 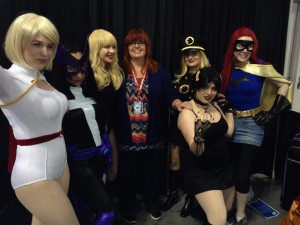 in terms of verisimilitude, including performance into the mix, particularly this group seen here, who had quite an effect on Gail Simone!

The larger shows are truly spectacular; the amazing variety of publishers and their wares, the buzz created by the huge crowd that the mass media promotions bring in is something that I’ve never experienced before (but have quickly grown to love!),  but I’ll say for the record that those of you didn’t have a chance to attend this inaugural event missed out on a convention that melded the best of both worlds into something truly deserving of the title “Special Edition”!