I’m not going to bore you with the insight that That’s Because You’re a Robot is weird. If you’re thinking of picking this one up, you know that already. In fact, you’re probably hoping it’s weird. When I finished the book and was looking back through–looking for answers, really–I noticed a white box on the cover that says “For Teen Readers” and I started to understand. At least, I think I did. 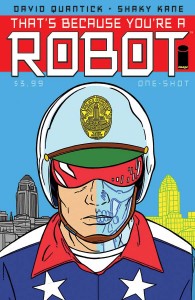 The inside of the front cover of That’s Because You’re a Robot has the headline, “Two cops: one of them is a robot – only they don’t know which!” It’s a simple enough premise–one that isn’t new in science fiction–but what’s interesting about it is that while this is the central joke of the book, the theme/purpose seems to be much more enigmatic and hidden. Or maybe it’s not there at all. And here is my central problem with the book: I don’t know if it’s trying to deconstruct the medium of comics by telling a story that essentially goes nowhere, or whether it is what it is and I should stop overthinking it and just laugh. Welcome to the world of post-modernism and pop art.

Our aforementioned cops, Jeff and Matt, discover the essential bit of information regarding their robot status on the first page. From then on, the two of them cannot seem to stop needling each other about how this thing or that thing makes one or the other of them a robot. Meanwhile, they bungle themselves through police work like a pair of bad movie cops, landing themselves on stakeout duty and eventually on suspension for their incompetence. They make some unlikely deductions that they hope will lead them to the answer of which one is a robot and storm the precinct to talk to a prisoner. In the course, they find a much bigger plot that has to do with the police. Their sergeant charges them with getting to the bottom of the plot with his dying breath, at which point they decide to do just that. And then the book is over.

Writer David Quantick does a lot of work in a lot of media, but Image’s solicitation for That’s Because You’re a Robot mentions his work on the HBO series VEEP and his BAFTA award (won for writing duties on the BBC show The Thick of It) specifically. What I find interesting is that I’ve seen at least a couple of episodes of each series and the thing that is characteristic of both is a foul-mouthed cynicism that is so over the top it’s funny. That’s not what I found when reading That’s Because You’re a Robot, however. In fact, there is an innocence and wide-eyed youth to the book that is more reminiscent of comic stories of the silver age than any f-bomb dropping politician. And perhaps this is where the “For Teen Readers” label comes in. What I’m still struggling with, however, is, “Why?”

I had not read a Shaky Kane comic book before this, but I think I will be rectifying that soon. I’ve certainly seen his work around, however, whether from the covers of Bulletproof Coffin or from samples of his work on 2000AD and Judge Dredd. It’s pop art, to be sure, but while there is plenty of whimsy and quirk to each page, there is also a self-awareness and an almost sinister quality to it that is not present in the work of other pop art comic creators like Mike Allred. What I love about the art in this book, however, is that there is no effort whatsoever to explain why Matt and Jeff drive a 20-foot-long and 10-foot-high Chevy, or why there is a Dino ramp on the highway, or why the local group of super villains contains a leprechaun, a frankenstein monster, and an astronaut. It really feels like Shaky was given free reign on any panel big enough to contain his ideas, and the effect is that I want to check out as much of his other comic art as I can get my hands on.

Wait and see. That’s Because You’re a Robot is a one-shot, which is why I have been so flummoxed by the cliffhanger in the story, but it’s also a very interesting conversation piece. The biggest effect it had on me was to make me want to check out more of Shaky Kane’s work, but from what I’ve seen, much of that is not appropriate for a younger audience. This book, however, is just fine to share with either of my comic-reading kids, and I can’t wait to hear what they think of it when they’re done. For the rest of us, I don’t see anything here that is so ground breaking or amazing that it can’t be missed, but that’s not a good reason to skip it, either. PIck it up if you’re a fan of these creators, pick it up if you’re looking for something different, or just pick it up because you need a palette cleanser to read between issues of Original Sin.