Growing up I was always a huge fan of Figment and the Dreamfinder. Figment was my favorite Disney character despite only being featured in the Journey into Imagination attraction at Disney’s Epcot Center theme park. I had plushes, puppets, and all the little plastic figurines you could only buy at the park’s gift shop. It took me several years and visits to the park to build up my little collection of Figment merchandise. In between park visits I would take Figment on visits to all of the various worlds and places in my imagination. We met dinosaurs, Transformers, Spacemen, and even Matt Tracker and the MASK crusaders.

“Imagination! Imagination! A dream can be a dream come true with just that spark in me and you.” 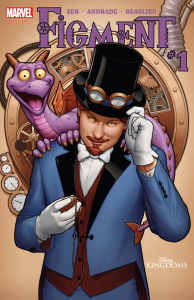 That quote is from the Journey into Imagination attraction’s song, “One Little Spark.” It’s a simple little song, but it has a powerful message. Imagination gives everyone the power to create and bring their dreams to life, and this is the theme that runs through Figment #1. Jim Zub was able to encapsulate all the wonder of Figment and everything that made the original Disney attraction such an amazingly awesome place to visit.

The story of Figment is a prequel of sorts that starts at the very beginning before there was a Dreamfinder. It’s an origin story, but it is something new. Figment and the Dreamfinder (Blarion Mercurial) are two characters that have never been fleshed out by Disney. Zub could take this in a bajillion different directions, but the path he chooses is one that feels organic. Blarion Mercurial is someone that has always been a dreamer, and we get to see little snippets of that sprinkled throughout the panels. Mercurial has always struggled against outside influences to go down the paths set in front of him and his ambitiously creative thoughts. It is a struggle children should be able to relate to, and one many adults will find nostalgic.

Nostalgia is a powerful word. It is the rose-tinted lenses we like to wear when we think about our past and the good times. It can blind us to the defects of new creations that strive to build off of our positive memories and experiences. It can fuel rage when we suspect our memories are being tarnished by someone or something. I was incredibly excited for Figment to come out, but I was also worried that my sense of nostalgia could ruin the experience for me. Would I be too harsh, or would I glance over glaring problems in the story and art? I watched a video that went through the original attraction (the one standing today is different than the 1982-1998 version). It was definitely cheesier than I remembered, but there was some still some magic there. I laughed a little that I was so enthralled by Figment as a kid, but as an adult it is something I would not mind taking my kids to see, because of the message and fantasy of it all.

As Zub was able to capture the wonderment in the story, Andrade and Beaulieu were able to paint it on the page. There was an artistic touch to the art that brings a beauty that adults can admire, but there is also a gleam of whimsical once Figment enters. Within the story it works well, because Blarion Mercurial is just beginning to bring his imagination to life. He works for a boss that strives for scientific innovation and disapproves of his work so far. We can see the creativity of Blarion peeking out in the slightly steampunk-Ghibli-esque machine he is building. I like that Andrade slowly works in the more imaginative art as the story progresses. Beaulieu also shifts from duller to brighter tones without causing a dramatic change of style midway through the book.

Figment #1 is shaping up to be a fantastic journey through imagination. Zub, Andrade, and Beaulieu perfectly capture what was at the heart of the original Disney attraction, but have created something entirely new. It may be an all-age’s comic, but it has the maturity to compete as a comic for adults and not just for kids. It is fantastical science-fiction. If you are looking for something new to check out, then do yourself a favor and give it a look.