Avengers Undercover wraps up its first arc this week with issue #5 and the big question hanging in the air is, “Will they or won’t they?” The premise of this title–in fact, the reason it’s named Avengers Undercover–has always been that the seven young “heroes” who survived Murder World would be infiltrating a den of supper villains in order to do some good. What issue #5 makes very clear is that what’s really going on is not that simple. 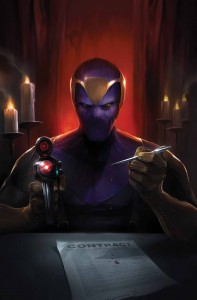 At the end of issue #4, Baron Zemo made the kids an offer to join him and his merry band of baddies. What this really meant was, “Join me or go back to jail.” Gotta make sure you read the fine print, you know. Issue #5 begins with each one of Zemo’s henchmen taking a couple of the kids and showing them around–showing them what life could be like. There is a point where Anachronism calls Bagalia City–where Zemo is based–“Badguy Neverland,” and the comparison is dead-on perfect. This place where these young, displaced heroes have found themselves, holds all the same promises as Peter Pan’s fantasy world: belonging, acceptance, friendship, and useful knowledge/training. Daimon Hellstrom takes Bloodstone and Nico and visits the local demon fightclub, Constrictor takes Deathlocket and Chase to his Oliver-like den of young thieves, and Madam Masque takes Hazmat, Cammi, and Anachronism for a leadership peptalk before ditching them on a rooftop. It begins to look like at least the first four of the seven would stay on their own, but Hazmat, Cammi, and Anachronism come up with a plan: join up with Zemo in order to try and take him down from the inside, clear their names and become real heroes. The question is whether everyone is really on board with the plan or not.

Dennis Hopeless does something with Avengers Undercover that I find quite unique in superhero comics: he presents the complexity of what it means to be a hero. We all know it’s been done before, and I’m not saying that it hasn’t been done well elsewhere. But, Hopeless has put his young heroes in an almost impossible situation and challenged them to try and get themselves out, and month after month the results are surprising while still being genuine. And, with the rest of the Marvel Universe dealing with cosmic questions far beyond the reach of mere mortals, it’s fascinating to have everything in this book be so street level. At it’s core, this is just another story of teenagers dealing with the pressures of life–fitting in, finding out who your real friends are, and doing the right thing–while still dabbling in hell creatures, magic, and super powers.

The art team of Walker, Gorder, and Beaulieu have been working on this book together since before it was Avengers Undercover–back in the Avengers Arena days–and they continue to get better and better. What’s more, I love that they are still getting to do all of the fun stuff that makes this book so great. Demon fight club, hellfire cages, super villain basketball, and Baron Zemo eating toast are all treated equally well and are equally fun to look at, in this issue and in every issue of this book. For me, the only odd-man-out is cover artist Francesco Mattina. He’s been handling cover duties on this title since the launch, and unfortunately his work just isn’t as dynamic and fun as the book itself is. Covers thus far have been dark and brooding, sometimes so much so that it’s hard to tell what is supposed to be going on, and feel woefully mismatched to the action in the book. Granted, the bar was set pretty high with Avengers Arena, which always had eye-catching and dynamic covers that were a joy to collect, but I find myself lately skipping over the covers to get to the stuff inside without a second look.

Buy it. Issues #1-5 of Avengers Undercover will make a great collected edition, but at the same time, this is the first book on my stack on those weeks when it comes out. And while this may be the end of the arc, it doesn’t feel like an ending at all. It feels like just the beginning.