Spinning out of the pages of Valiant’s flagship title X-O Manowar is the company’s newest event mini-series, Armor Hunters. Valiant has been promoting and marketing the event for the past several months and the release even saw a limited supply of throwback chromium covers. The question though is does the premiere issue of Valiant’s summer event live up to the hype? 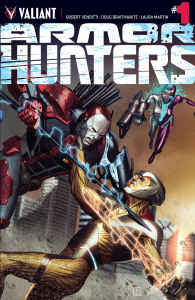 I want to say yes, but there is a part of me that wants to say no as well. Let’s talk about the positives first. This is the first issue in an event and it needs to setup up everything that will follow in the next three issues. It needs to be accessible for new readers and those that do not follow X-O Manowar. Venditti is able to do all of that in this issue. We get enough backstory as to not alienate and intimidate those not in the know.

As someone that reads X-O religiously I felt the issue was a little slow and wasted time explaining what is already established. However, seeing Quartz smash some Russians to a literal pulp held my interest long enough for the “oh no they didn’t!” ending of the issue. So for a semi-slowly paced issue, there was some pay-off. This is rather typical of Venditti’s work in X-O as well. Things start off slow, but by the end of an arc things are ramped to up to eleven.

Braithwaite’s art did not look to be up to his usual levels as well.  The Armor Hunters looked great, but there were some inconsistencies amongst the human characters. The proportions and scale of characters felt like it shifted between pages. I was a little disappointed with this issue for that.

For new readers interested in a game changing even from Valiant, pick up Armor Hunters. It is not the best of what Valiant has put out, but it is a fairly solid kickoff to the event. If Venditti’s past record on X-O Manowar is any indication, then your investment will be returning huge dividends by the conclusion.