Seraph of the End is your classic post-apocalypse story. Humanity has fallen, and vampires have sprung out of nowhere to establish dominion over the earth. At first, there is no resistance; a disease immediately killed all humans over the age of 13. The remaining children grow up in blood farms, kept alive and healthy for the sole purpose of providing unlimited substance to the new vampires. 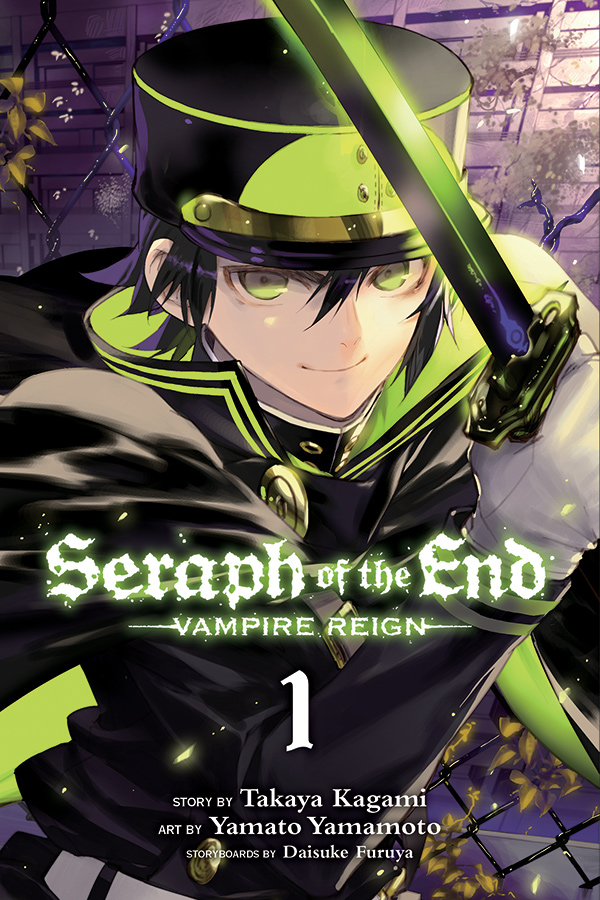 Yuichiro Hyakuya is a young boy in a blood farm. He’s spent the past four years being poked and prodded by vampires, and he’s ready to take down every vampire he sees. Problem is that he’s 12, and even a grown man has 1/7th the physical capacity of a vampire. To his knowledge, there are no easy ways to kill a vampire.

When Yuichiro finally escapes his prison, he discovers the world is not what the vampires told him it was. In short, humanity is far more resilient than demons expect.

One of the most unexpected aspects of this series so far is that part of it takes place in a post-apocalyptic high school. Yes, once Yuichiro escapes from his hell he enters into a high school, complete with bullies and pretty girls. With humanity on the brink of destruction, a high school seems out of place. However, this high school serves as a reminder of normalcy for students who have limited memories of a time without chaos. Sure, there are some strange military things going on with the school, but the heart of the school is creating bonds between students and encouraging repopulation of the world. All of Yuichiro’s friends died in the orphanage, and he has refused to get close to anybody since then.

There is something to be said about this strange element in a post-apocalyptic story. Yuichiro is solely focused on getting revenge against the vampires who destroyed his life. He doesn’t reach out to others; he doesn’t acknowledge the presence of others around him. In order to move ahead in the ranks, the military requires Yuichiro to make friends and find people to depend on in times of need. This requirement opens the door for future character development for Yuichiro.

Seraph of the End by Takaya Kagami is still a relatively new title; the first volume came out June 4th, and the series is still running in VIZ Media’s Weekly Shonen Jump (currently on chapter 21). This is the perfect time to jump in on this shonen series, especially for fans of action, drama, and paranormal stories.