Last month I reviewed the first issue of Cyclops. I thought it was a good comic, but I wanted the adventure to step it up a notch. Issue #2 came out on a week I was making drastic cuts to my pull list, so any titles still teetering on the fence after I read this week’s books, were cut. 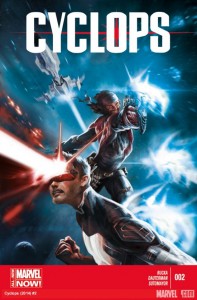 As soon as Cyclops and his father, Corsair, touched down on an alien world I became increasingly interested in everything that was going on. Rucka says it best through Cyclops’ thoughts in the issue; Corsair is a mix of Jack Sparrow and Han Solo. I was definitely picking up on the Han Solo vibe, but I was also feeling something else in this issue. There was definitely an air of Doctor Who in the mix as well. Scott Summers is the wide-eyed companion taking in all the wonder of the galaxy as his dad is the Doctor guiding him and introducing some of the stranger customs of the cosmos. And just like the Doctor, Corsair lies. However, the similarities with Doctor Who stop there.

It is what Corsair is keeping from his son that Rucka uses to draw us further into the story. Rucka is continuing to build up the relationship between the estranged father and son, and I think it should be expected that sometime down the line whatever secret daddy Summers is keeping will be revealed to all. How that plays out between the two Summers will all depend with how far Rucka has progressed their story at that time.

Ultimately though, what draws me to the book is the sci-fi world that we got in this issue. We only got to see him for a few panels, but I really hope we get to see more of Baroque in the future. He is the tentacle-arm equivalent of Lando Calrissian. Every little bit of this issue I found endearing in some way.

As with last the last issue, the art team is doing well. Dauterman is able to capture the adventurous spirit and tone of the series thus far throughout the various encounters in the issue.

This is a buy for me. I was teetering on dropping the series after the first issue, but Cyclops #2 was a lot of fun. It captures the spirit and tone of some familiar sci-fi series, but does it in its own way. I’ll be on board for a while yet.