They say you can’t go home again–something I believe to be true. However, There needs to be a similar fortune cookie saying for going back to your favorite stories and characters. Maybe that’s not fair since not every property given a new lease on life ends up misusing it, but so often these trips back to the well go so poorly. I’m not going to say that Big Trouble in Little China is not fun and funny, but I just couldn’t help thinking while reading it that there are so many other things that could be done with these characters. 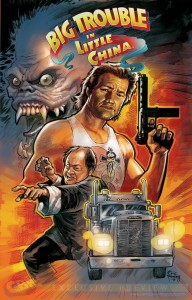 I really wasn’t sure what to expect from this title. I honestly did not know whether it was just a rehash of the original movie or whether it was a different story. Fortunately, I can say that this is a new story, written by Eric Powell with notes and ideas from John Carpenter. It begins with Jack Burton in his truck on a dark and stormy night, just like the movie. But, things soon take a detour when a giant monkey looking monster jumps into the cab of the Pork Chop Express with Jack. We quickly discover, however, that this intrusion is not malicious–the monster seems to have a kind of crush on the studly man-about-town that is Jack Burton. Jack quickly pulls a u-turn and heads back to Chinatown, determined to drop off his new found friend.

This is the point where we find out that this story takes place only a couple of days after that of the original movie. Kim Catrall’s character, Gracie, is nowhere to be found, but Jack’s friend Wang is in the middle of getting married to his green-eyed-girl when Jack bursts in with his monkey friend clad in a “disguise” procured from a truck stop. Jack consults Egg Chen and finds out that his hanger-on is a demon, and is bound to Jack forever because Jack was the one who defeated Lo Pan, the person to whom the demon was originally bound. Moments later the Wing Kong further crash the party, and Lo Pan’s #2, Qiang Wu, vows vengeance for his master’s death. He captures Wang as collateral and gives Jack a quest to save his friend–he must travel into one of the Chinese hells and retrieve the spirits of the three storms. Jack accepts in the most manly way possible, and we have our setup.

There is a moment in the book where Jack regales the monkey demon thing with stories of one of his previous marriages–an adventure which included luchador-mask-wearing bikers, a Nebraska death cult, and some kind of snake-like demi-god–and I found myself wishing I was reading a comic about that story instead of this one. Here it feels like we’re just running over the same old ground that the movie does like any other ill-conceived sequel out there. It’s not bad, but it’s not very imaginative either.

While reading through the book the first time, I wasn’t bothered so much by Brian Churilla’s art, but the more I think about it, the more I realize how it contributes to my lukewarm feelings about this title. His style is not unlike a Saturday morning cartoon or a mall caricature artist–a little over the top and very cartoony. In no way is the art bad, but I felt myself wishing that Boom had gone a different direction with it, just in the same way that I wish they had gone in a different direction with the story. Nothing–from the pencils to the colors to the letters–is bad or poorly done, it just all feels like the wrong idea at the wrong time.

Wait and See. I should emphasize again that Big Trouble in Little China is not bad at all. In fact, my first reading of it was a lot of fun. And, if you are a huge fan of the movie, the genre, or just in the right kind of mood, then this book should be right up your alley. Maybe the whole thing will read better in trade. But, like I said, I couldn’t get over the creeping feeling as I read this book that it was unnecessary, and that there were other books–and even other versions of this book–that I would rather be enjoying.