Truth be told, I’ve always been skeptical of crossovers. More often than not they end up being mediocre stories wrapped in either nostalgia or a seeming money grab. Sometimes, however, crossovers not only make a certain amount of character sense, but also seem to signify a good will between comic companies that otherwise act as sovereign universes. And then, sometimes, a crossover can be what it really should be: a chance to have some fun reading comics. Meet Batman ’66 Meets The Green Hornet. 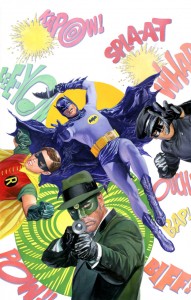 To be clear, I don’t read Batman ’66 and I’ve only read a bit of the Green Hornet comics. Batman was just too close to the TV series for me, and the Adam West Batman was never MY Batman. The comic did it’s job just a little too well. I’ve read some of Mark Waid’s current run on Green Hornet, but I fell behind on reading and decided to back off until I could catch up. The Green Hornet is a character that, while fun and interesting, just never struck any chords with me. What is great about this crossover between these characters, then, is that they seem to balance out my problems with each individually. The addition of Britt Reed and Kato brings a much needed variety to Batman ’66, while squaring off with/against Batman and Robin gives me a reason to like The Green Hornet and Kato. Throw in a dash of Kevin Smith and it’s all just the right kind of camp and circumstance that makes for a super-fun read.

The story is simple enough: an expensive collection of fossils is being transported from the museum in Gotham to another museum in another city, and Batman has been asked to accompany the shipment to thwart any attempt at theft. Bruce Wayne decides to ride along as himself–Bruce is a benefactor of the Museum being, you know, a super rich guy–and soon stumbles on Britt Reed, who purports to be on the train to get the scoop for his newspaper. The train is then stopped in its tracks–LITERALLY–by a villain armed with ultra powerful glue. He manages to trap the four vigilantes and we are left there for the classic cliffhanger.

Smith’s presence is subtle but well balanced in the writing collaboration with Ralph Garman. Some of the jokes carry a wink that can only come from a pop culture aficionado like Smith, and I found each one to be enjoyable without being overbearing to the tone and pacing of the story. The villain, also, seems to carry a Smith influence as he is a more obscure and ridiculous Batman TV Series baddy who’s been given an upgrade. Garman, Smith’s partner on the Hollywood Babylon Podcast, obviously works well with the podcast magnate. Overall, Smith and Garman’s writing keeps within the confines of the source material, only straying out occasionally to look back and chuckle.

Ty Templeton does a wonderful job here of keeping the art light and fun while still maintaining his grasp on the likenesses of the characters to their human counter parts. His style has that pop art flare that reminds the reader of Mike Allred, and Tony Avina does a great job of keeping the color simple and bright without overwhelming the art, much like Laura Allread does so well. And I just need to take a moment to talk about the cover. Obviously, Alex Ross does a lot of cover work for a lot of companies, but something about this one stands out for me. It’s fun, it’s whimsical, and it just says everything you need to know about the book.

Buy it. As i said before, I don’t read Batman ’66 or Green Hornet, but unless things take a drastic turn for the bad in the coming issues, I’m in for six issues of this crossover. It feels like it has just the right amount of everything, not too much and not too little. Also, just like Batman ’66, this is a digital first title. However, it looks like the digital issues are half the size and two dollars each, which will end up costing you an extra dollar per full-size issue by the time you’re done. And, if issue one is any indication, these were written to be read as full-size issues. Now, you could wait for the trade on this one, but to get the full “same bat-time, same bat-channel” experience, I have to recommend the single issues. However you get it, though, I highly recommend you get in on the fun.