We are only two issues in, but Rai is quickly becoming my favorite Valiant title, if not one of my overall favorites. Kindt’s writing has been beyond amazing. Valiant really scored big getting Kindt on not just one, but two of their titles (the other is Unity). AND both titles are kicking major ass! 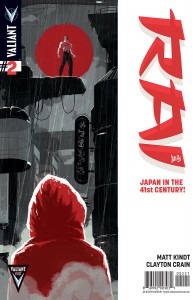 Rai #2 picks up immediately following the closing pages of the first issue, and we are thrown right back into the action. Kindt continues to build up the world of 4001AD Japan in a way that is welcoming, and does not overwhelm the reader. There are references to Harbinger, Eternal Warrior, and Unity sprinkled throughout the entire issue. It’s a nice touch for those readers of other Valiant series, but they are not so glaring as to confuse new readers. The connection to Unity is probably the most obvious, and after some reflection on the issue, it is not all that surprising since Kindt is writing both titles. If you are a new reader and looking to explore more of Valiant, then Unity might be a title to check out (specifically issue #5-7).

Crain brings the characters to life and continues to add depth to Kindt’s story. As with issue #1, Rai #2 is gorgeous. There is a panel with Rai holding up Lula in the old “analog” Library of Congress that I love. Here we have a rather deadly, fearsome champion of Japan befriending a teenage girl. Lula brings the street smarts and humanity to the team; a perfect complement to the always-digitally-connected Rai. Crain is able to capture this dynamic in just a few panels, and shows that he can bring almost anything to the series.

The whole issue from art to story carries both the obvious sci-fi elements and the more subtle elements of noir and hardboiled detective stories. I can definitely see some of the latter in Lula’s and Spylocke’s parts of the story. There are new questions being asked by the end of the issue, but it only adds to the depth of the story and increasing the reader’s interest.

Another strong BUY! If you only read one Valiant title, Rai should be that title. It can stand on its own, but it does make hints to outside Valiant universe. It’s shaping up to be an in-depth mystery and 41st century sci-fi conspiracy story. Kindt and Crain are doing nothing wrong.