This week, Seekers of the Weird wraps up with issue #5. It was an interesting experiment–a reminder that Marvel may look the same, but is still owned by the mouse-eared giant. But, with as cool as the concept behind Seekers was, it seemed like it might be a fun read. And, with a couple of small exceptions, it was. This is the kind of book that you give your ten-year-old nephew for his birthday, but not before you sneak a read for yourself. I think it has the potential to be a really cool collected edition if handled correctly–maybe with some concept sketches and other insight into the Museum of the Weird, the attraction that never was. 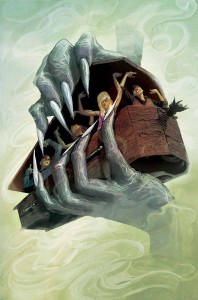 If you’ve been reading along, issue #5 starts off pretty much where #4 ended. However, what issue #5 is really all about is the kids taking control of the situation. After realizing that they can use the killer plants as troops for their own cause, Max and Melody are treated to a poor-little-me-fest from Uncle Roland, after which he refuses to help them so that he doesn’t screw things up for them. Max gives him a kick in the ass and then leaves to join the fracas. The Museum’s main hall is a battleground between the Wardens and the Shadow Society, and, at any moment, the coffin clock could strike 12 and release the Reaper King. The fight continues with the kids in the fray for a bit until the clock really does strike 12 and the Reaper King appears. Instead of attempting to assert some kind of dominance over his enemies, however, the Reaper King decides to first scold his own followers for taking so long to release him. He spends the next few pages tearing away from them the powers that he had given, giving Max and the Wardens time to formulate a plan. The Reaper King is defeated, the Shadow Society escapes, and order is returned.

I only have a couple of problems with this story and this book, and they are these: first, as you might have detected above, I didn’t quite buy the way the reveal and repeal of the Reaper King ended up. Once we did finally get to see him, he acted like a petulant child, blew his chance at freedom, and ended up right back where he started. Also, for a book that is focused on an attraction that never came to be, I would have liked to see more of the museum. As it was, the Museum of the Weird was more of a backdrop than anything else. And finally, I’m still a little sore over the artist change in the third issue, mostly because it added something fun and different to the book that made it even more special, only to then be taken away.

Don’t get me wrong, Karl Moline’s pencils are great and he does a wonderful job of telling the story. However, When Filipe Andrade took over on issue #3, it felt like the book had finally gotten the last little bit of weird that it needed. Unfortunately, the change only lasted for the one issue, and Moline was back for issues #4 and 5. Maybe I wasn’t the only one who liked the switch, however, because it looks like Andrade will be drawing the next Disney Kingdoms series, Figment. As for issue #5 of Seekers, however, Moline does a great job of giving us a nice large-scale battle, making the Reaper King creepy without over doing it, and wrapping up the series in a satisfying way. Make sure you get a good look at those covers, too, because the Mike Del Mundo ones have been great all throughout the series. The collector in me wants to get the variants that feature the concept art from the original attraction, but the Del Mundo pieces are really something special.

Wait and See. Fans of Disney and especially the Disney World/Land experience will enjoy this book. If you’ve got kids in the 3rd grade and up range, this would be a great story to pass along to them as well. And, as I said before, I think there is some potential for a great collected edition with this book that would make a nice gift. But, I’ve told you my gripes with the story and the presentation, so if those sound like things that would bother you, you’re probably better off skipping this miniseries. For the first time out with this Disney Kingdoms concept, however, I think Seekers of the Weird was a fun idea with only a few little weaknesses.