One of the many things that I love about Ms. Marvel, and what came first to mind while reading issue #4, is the pacing. Origin stories for new characters in modern comics are hard–either you’re in the suit and fighting crime too soon, or you’re accounting for every bit of fractured psyche and moving too slow. Ms. Marvel, however, gives it to us Goldilocks style: just right. 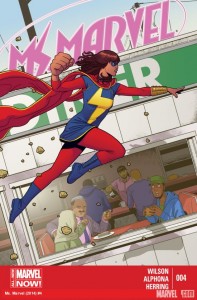 Issue #4 begins right where issue #3 ended: Kamala Khan, in the form of Carol Danvers’s Ms. Marvel, lays on the floor of the Circle Q after being shot trying to stop a robbery. Matters are only complicated by the fact that her second best-friend, Bruno, is the manager. Bruno calls 911 to try and get help , and Kamala quickly drops the Carol Danvers act to let Bruno know how complicated the situation really is. However, she also finds out that shifting back to her original form allows her to heal, though it seems like she can’t start shapeshifting again right away. Once the cops show up, Kamala is using an overnight mask with holes poked in it to try and hide her identity, but the cops aren’t really buying it. Strange things are afoot at the Circle Q.

Bruno convinces Kamala to become a hero and help him straighten out his little brother, who’s fallen in with a bad crowd. She scrounges some things from her wardrobe and, after yet another scolding from her mother, puts together a version of the costume that we’ve seen on Ms. Marvel covers and solicits since the series launched. She sneaks out of the house in order to go find Bruno’s little brother, and maybe stop the guy he’s working for–someone called The Inventor. She breaks into the rundown house where the thugs make their base camp and finds some very high tech security robots guarding the place. Kamala gets past them and finds Vick, but not before she’s discovered by a not so nice looking guy with more crazy tech. And fade to black.

There is a moment while Kamala and Bruno are talking that Bruno says, “Who cares what people expect? Maybe they expect some perfect blonde…what we need is you.” This, to me, is the perfect explanation of why Ms. Marvel is an important book to have on the shelves right now. Kamala is a young woman, a muslim, who dreams of being a hero. But she believes, as so many people seem to, that in order to be a hero, you have to look like Carol Danvers or Peter Parker. But, she’s learning that her appearance is not what makes her a hero, and I hope that comic readers will learn that lesson, too. Who cares if Johnny Storm is black, or Wonder Woman is a… well, woman. They are heroes, and we love hero stories.

But, despite whatever preaching and grandstanding goes along with the critical reading of Ms. Marvel, the most important thing is that it’s really really good. G. Willow Wilson has done a perfect job of capturing the life of an American teenager and all of the complications that go with it. Like, you know, when you develop super powers and have to keep sneaking out to fight crime. The story is moving along at just the right pace, as I said before, the characters are great, the action is fun but still has that tinge of danger: it’s all worth checking out if you haven’t already.

My biggest concern about Ms. Marvel is what will happen when Adrian Alphona takes a break from art duties. Alphona’s style is not only unique and absolutely perfect for Kamala Khan, I’m afraid that it’s essential. I have a very very hard time imagining this character without his guiding hand. Maybe they will at least keep Ian Herring around, as he’s created the perfect color look for the book, a sort of muted but still colorful palette that has a wonderful softness to it. It’s just perfect for this suburban town where strange things seem to be gathering. Oh, and just a quick word on the cover: I didn’t realize how much I miss Jamie McKelvie until I saw the cover for this issue. He’s a great artist anyway, but his covers are something special.

Buy it. This is issue #4 of Ms. Marvel‘s initial five-issue arc, and it is a near perfect origin story for one of the best characters to come to the big two in a long time. Kamala, to me, is on the same level as Miles Morales, and if you’ve read any of my other reviews you know that I really like that kid. That being said, I want to see this book thrive, so please, grab three bucks and check it out. I think you’ll be happy that you did.