Harbinger #23 is the second issue in the “Death of a Renegade” story arc, and brings about the actual death of one of the members of the Renegades. There has been a lot of hype leading up to this issue, and that hype is this issue’s biggest flaw. Dysart has delivered one of the most badass issues of Harbinger to hit the shelves. The action is ramped up to “season-finale-let’s-blow-the-entire-budget” levels of awesome. There are some incredible displays of psyiot power from Harada that provide yet another demonstration of his abilities. 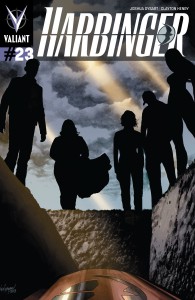 Henry and Evans are able to bring to life Dysart’s story as the issue shifts focus between each of the characters and their respective mission tasks. I am normally not a fan of multiple artists for an issue, but with the level of action and intensity present in this issue, I can understand the need to bring in an artist to get the issue out on time. Both artists have worked on Harbinger, so the issue flows without distraction.

Honestly, this is a really solid issue of Harbinger and probably one of my favorites to date. The only drawback to the issue was the death of a Renegade, and even that was not done poorly. The problem with the death was that it was advertised before the issue came out, so my expectations were for a grand exit. While the Renegade went out as a hero, it felt a little anti-climactic after the hype for the issue. I think that if Valiant had not advertised that a character would be dying it would have been more of an “Oh, S%#t!” moment. The death did hit home with the other members of the Renegades, and pushed them in their continued fight against Harada and his Harbinger Foundation.

The issue had the right beats, and the ending of the issue sets up the next with some wicked anticipation. The issue delivers, and gives us our fist-pump-hell-yeah moment. It gave me chills like the first time I saw the series-finale of Angel. The Renegades are going to work.

This is one of the best issues of Harbinger to have hit the shelves. Its only fault lies in the expected death of one of the characters. It is just another example of hype killing the moment. Trade waiters and those that ignore comic news sites will probably get a little more out of the issue. At the end of the day though, this is a great issue, and if you have picked up Harbinger in the past, you should be reading this arc (started with issue #22).

If you want to hear a more spoiler filled review and discussion, be sure to check out the new Renegades: Talking Valiant podcast. Episode #2 just hit and we did a retrospective look at Harbinger and gave our predictions as to which of the team dies. Stay tuned in the next few days for a mini-sode discussing issue #23.