There are some of you out there who will be laughing at me through this review. Those of you who were among the faithful Fantastic Four fans during the Jonathan Hickman years will smile and think I’m cute as I chronicle my frustrations with Avengers–the stories that unravel themselves only to reweave themselves two issues later, the tidbits from last year that form this year’s central plot, and so on. I actually dropped this book from my pull-list during the last arc. I added it back today. I’m starting to see the mad genius that is Jonathan Hickman, and it’s a bit like staring into madness itself. 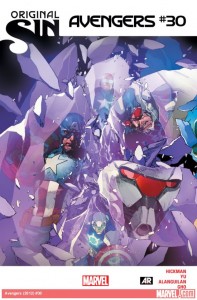 I am going to say right off the top, however, that I have no idea what this issue has to do with the Original Sin event. I’ve been reading Original Sin, and Avengers, and New Avengers, and from what I can tell, Avengers #30 has more to do with the events of New Avengers than it does with Original Sin. Now, it’s possible that all of these things are connected, and if so then I will stand corrected and raise the flag of victory for the Marvel writers who brought this all together, but I just don’t have enough information to be able to say that for sure yet. If you haven’t been reading Avengers and have just been picking it up for the Original Sin event crossovers, then I am sorry–I can’t imagine how confused you must be right now. However, if you’ve been reading New Avengers and Avengers since the renumbering and Hickman taking the helm, then this book is really starting to get good. Really, really good.

Avengers #29 was just two weeks ago, and I consider it the beginning of this title regaining its foothold. In it, Captain America remembers the events that happened early in New Avengers that caused him to be ejected from the Illuminati and have his memory wiped. He decides to confront Tony Stark about his memories, but he doesn’t go without backup. We also find out what happened to the final gem of the Infinity Gauntlet that Cap used and broke early in the New Avengers series. It was the Time Gem, and it shattered like all the others, but it just didn’t shatter at the same time as the others. Instead, it shatters while Cap is confronting Tony, catapulting the Avengers almost 50 years into the future.

Issue #30 picks up at that moment, as seven Avengers from the past appear on a roof top sometime in the 2060s. Cap and company find themselves in immediate conflict with some automated Iron Men, the current Avengers Union, and themselves. Fortunately, Hawkeye from this future time shows up to provide everyone some much needed exposition, after which he proceeds to all out attack Tony Stark for little more than being an asshole. Shortly thereafter the Time Gem appears again and the Avengers are whisked forward another 350+ years.

What I loved about this issue is that it pulls so much together from the very beginning of New Avengers; it establishes that even though old Hawkeye knows some of what is going on, each of these incidents is unique in the time stream; and with all of it’s complicated sci-fi mumbo-jumbo, what it’s really about is the characters. Captain America and Tony Stark are in pitch perfect character all throughout this book, and it is a joy to read. Not to be outdone, however, Hawkeye, Starbrand, Thor, and even Hyperion are all perfectly in character. Hickman has done a masterful job of keeping all of this going as long as he has, and I’m overjoyed to see it all start to come together.

I don’t know if there are enough words to describe just how much I like Leinil Yu’s pencils, but what I can say for sure is that his brand of seriousness and drama compliments Hickman’s story perfectly. A lesser artist would make this complicated subject matter seem cartoonish and ridiculous, but the gravity of Yu’s faces and the weight carried by each of his panels gives the whole story the perfect level of drama. Just the lines of old Haweye’s face carry the weight of the book and the seriousness of the characters’ situation with a kind of wrecked beauty. Colors by Sunny Gho are pitch perfect also, which cannot be easy around Yu and Gerry Alanguilan’s super heavy blacks. Gho manages to retain the colorfulness that is characteristic of the Avengers without resorting to the monochromatic for drama like New Avengers does sometimes. All in all, a wonderfully drawn book, and one that can be looked at again and again to find new nuance.

Buy it. Again, if you’re buying this only for the Original Sin crossover, I don’t know what to tell you. I just don’t see how the stories connect. However, if you’ve been collecting New Avengers and Avengers from the renumber, now is the time. Now is the time that things feel like they are finally coming together, and it’s glorious. I can’t wait for the next issue.