I find it hard not to be skeptical when a new Mark Millar book comes out. For the longest time, he seemed like a one-trick creator, and while he’s written some great stories, I’ve also felt like he could be doing a lot more to get out of his box. MPH is a return for Millar, in some sense, to the gritty world of crime and drugs, where criminals are the heroes as well as the villains. And, while there are aspects of the book that are different for Millar, I feel like this one will get shelves right next to so many others and just get lost. 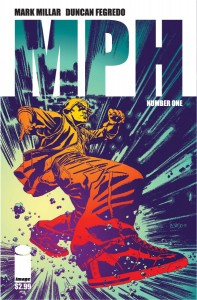 MPH begins with a four page story about Mr. Springfield, a man who gets super speed from somewhere, and ends up tearing gash through two states before he can finally stop himself. This was in 1986. Jump to 2014 and we meet the main character, Roscoe, whose name is only ever mentioned once. He belongs to a group of criminals led by Samurai Hal. Hal is a big believer in positive thinking, the laws of attraction, and is playing chess in a strip club when we meet him. Roscoe is a disciple, spouting self-actualization self-improvement stuff to whoever will listen. He’s got a “vision board.” Hal sends Roscoe on a job to deliver some cocaine and it turns out the buyer is a cop, so Roscoe goes to jail. He’s still so positive and up-beat that it’s almost unbearable, though. That is, until he finds out that Samurai Hal actually set him up to get a shot at Roscoe’s girlfriend. At this point, our guy starts to fall apart. He gets in a fight that lands him in solitary for a couple of weeks, then, for the first time, he allows himself to take drugs. It turns out that the drug he’s given by the skeevy prison dealer is from a bottle labled MPH. Suddenly, he’s is moving so fast that everyone else seems to be standing still. He swipes the bottle of MPH and walks right out the front door of the prison. The book ends with the reappearance of Mr. Springfield, who promises us some answers.

Here’s what I liked about MPH: it’s an interesting enough story set in a place I find interesting–Detroit–with a quirky character. It does not have Millar’s familiar ultraviolence and rampant swearing. Here’s what I didn’t like: Millar is once again stepping into this idea of “real world superheroes” which just seems done to death. While quirky, I can’t really say that his characters are relatable, especially the main character.

Duncan Fegredo’s art reminds me of Brian Hitch, especially in the way he constructs his faces. There isn’t much action to be had in this first issue, but the pages where Roscoe walks through a frozen world are pretty cool. The colors are good, overall, but there is something that happens when the story turns from the night in the strip club to the next day that just drives me nuts. The colors go from this subtle, nuanced blend of lights and shadows to bright, almost primary, colors with little shading. At first glance I thought that they had to change colorists in mid-book, but I haven’t found anything to corroborate that. I realize that day is brighter than night, but the transition in the color was way too drastic.

Skip it. If you are a Millar-verse fan, then you’ve probably already got this one, but for me, I think I’ll pass. Maybe I’m getting jaded, but I was never a huge fan of the “real-life superhero” idea in the first place, and with as many times as Millar has gone to that particular well, I feel like it’s gone pretty dry. I may look in on MPH when it comes around to trade paperback time, but until then I will be reading elsewhere.