On its cover, The Last Broadcast is billed as an Urban Exploration Fantasy. I didn’t find too much of that in this first issue, but what I did find is a shuffled together story of magic, magicians, history, myth, and urban legend. Yes, there was a few pages of urban exploration in there, which all looked very cool, but that was just one scene of many. 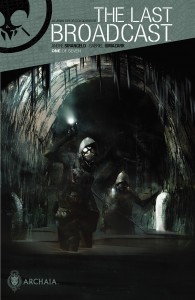 The story takes place in several scenes that are shuffled throughout the book with only the context of each to let you know where and when you are. The book centers around Ivan, a young and struggling magician. He seems torn between what he considers the more elegant, older forms of magic–like mentalism and escapism–while knowing that he has to have the more flashy stage show magic to pay the bills. He’s also a little obsessed with an old magician named Blackhall who may or may not have faked his own death. Through all of this, the story jumps from place to place, from one of Ivan’s auditions, to a fight he has with a friend, to the treasure hunting expedition deep underneath San Francisco, to the aftermath.

With the way that the story is told, it’s less confusing than you would think. The art and dialog provide sufficient clues to let us know where we are in the story, most of the time. My only issue with the book is just that it’s not really what I expected. The solicitation that I read really played up the urban exploration aspect of the book, which is not very well represented in this first issue. Whether it will play a bigger role later is yet to be seen. Unfortunately, this book is also just a little bit dull. The story is no bad by any means, and I have to say that I was impressed with the dialog, especially for Ivan. But, there just wasn’t a whole lot of excitement in this first installment. I believe that the story has the potential to be exciting and it may get there as soon as issue #2, but for now it was just a little underwhelming.

The first thing I want to say on the art side of things is that Archaia puts out a very nice product. The cover for Last Broadcast is a heavier stock than I’ve seen on a single issue ever and the interior pages are of a nice, heavy gloss type paper that brings out the color nicely. Also, the inside of the front cover, the back cover, and the last two pages are all littered with little clues, cyphers, and puzzles, presumably to help unravel the mystery of Blackwell. The last two pages also provide some additional information on the urban exploration group in the book as well as some news clippings about Blackwell. I didn’t spend a whole lot of time with all these, but they look like a fun little bit of extra stuff to keep the book in your hands a little longer.

The art in Last Broadcast is quite unique, and yet has a familiar quality to it. It reminded me of some manga I’ve seen–not the clean, goofy manga that is so prevalent, but a sketchy, almost messy version. Color is used very sparsely, but very effectively throughout the book, with just splashes of it here and there to provide depth and contrast. And, despite what you might think based on my description, the characters are all unique enough to keep them from blending together. I do feel like the art in much of the book allows for some detachment, keeping me from really getting into it. The only panels that seem to have any dimension are the urban exploration parts of the story, and everything else is flat and kind of washed out. I’m sure that all of this is deliberate, but it served to keep me at an arms distance for much of the book.

Wait and see. There is a lot about The Last Broadcast to like, but I feel like a lot of that is still to come. Basing my opinion entirely on issue #1 means that it gets a, “meh.” But, there is a lot of potential here, and six more issues to realize it in. I personally will probably pick up issue #2 to see if it gets better because I believe it has to potential to. However, for this first step into this world, it seems just a little shakey. (By the way, if anyone decides to do the puzzles in the book, I would love to hear what you came up with.)