Brain Boy is back! It’s been almost six months since the zero issue and now the world’s most powerful psychic returns, bad attitude and all. This time, we’re in for a four-issue miniseries called The Men From GESTALT, where we and Matt Price begin to find out more about the secret organization who is trying to turn the many into one. 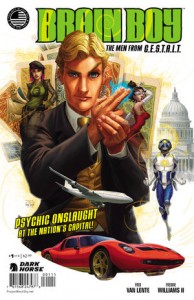 There is a lot leading up to Brain Boy: Men From GESTALT #1. There was the three issue miniseries from last year, then the zero issue. There was also a Free Comic Book Day offering from Dark Horse under the name Project Black Sky, as well as the newly launched projectblacksky.net, a webcomic written by Fred Van Lente dealing with the past of the project. All of this ties in to Men From GESTALT, either in small or large ways. And this, unfortunately, is the biggest problem with issue #1. We spend so much time catching up that there isn’t much time to get to the actual story.

The story begins with a thrilling attack on the president by a very powerful psychic in some kind of crazy suit. After chasing the president and the first lady around the White House residence for a bit and taking out many secret service agents, we find out that the person in the suit is Brain Boy himself, Matt Price. Cut to three days earlier: Brain Boy is having a fight with his girlfriend, Luisa, over using his powers on her to make her forget that he left the toilet seat up. It’s a silly thing, but it brings up some much larger issues, for the reader and for Luisa, and she leaves. The whole scene felt like watching an old James Bond movie where you realize that Bond is seriously sexist, like to the point where it’s uncomfortable. I’m sure this was Van Lente’s intention, but still. Anyway, Matt then gets a call from his boss about an assignment–a rival, Russian psychic to take out–and he’s on his way. On the plane he runs across… something that looks like Uta from issue #0 who wants him to return to GESTALT, at which point they sort of kidnap his soul, or something.

It’s definitely a good setup, and I have enough trust in Van Lente with this character that I will stick around, but as first issues go I felt like it was all catch up and no substance. I’m sure that the issue is meant to be a jumping on point for new readers, but not only does that drag down the story, I’m not sure that it works. I still had to go back through my issues from last year to remind myself who everyone was and what their place in the story was. But, like I said, I have confidence that next issue will be better.

Freddie Williams II art grows on me the more I look at this book. His action is dynamic, his faces are expressive, and he’s got a great handle on dramatic angles within panels. He reminds me a lot of Marvel-era McFarlane or young Greg Capullo. Colors by Jeremy Colwell are also quite good, and I really like how they’ve changed the “I’m doing psychic stuff” graphic to look less like energy blasts and more like a bunch of geometric circles.

Wait and see. If you’re into the new iteration of Brain Boy, go ahead and grab this. If you love 60s and 70s style spy stuff with a sci-fi twist, you’ll also enjoy this. Just stick it out to issue #2. Van Lente has done great stuff with this character already, and I’m sure that all of the recap in this issue is what dragged it down. Make sure you also check out projectblacksky.net as well as the Free Comic Book Day offering of the same name (available for free on the Dark Horse app, or you might still be able to find one in your local shop.)