There is no one better than Geoff Johns at redefining the status quo of a superhero universe. Infinite Crisis, Blackest Night, Brightest Day and Flashpoint, love them or hate them, are expertly written, universe shattering (sometimes literally) books that show a deep understanding of the world that he is redefining.  You also need look no further than the way the man saved Green Lantern and Aquaman 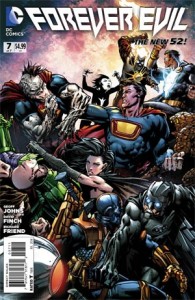 from irrelevance to realize that Geoff Johns’ ability to scour the unfamiliar corners of the DC Universe and bring back gold is nothing short of amazing.  But, would all of this great talent and past success equal a satisfying end to his newest series Forever Evil?

I absolutely loved the way Johns, artist David Finch and co. wrapped up the dark, brooding and fascinating world they created oh so many months ago.  The final physical battle between the members of our “Injustice” League and the Crime Syndicate is wholly satisfying. The altercation, staged in the rain, features some of the most interesting power sets in the DCU and it was a fitting end to the build up of the past six issues. But more satisfying than the action was some of the emotional catharsis of the series finale. There is one particular scene involving Bizarro, yes Bizarro, that nearly brought a tear to my eye. The story is also rife with surprising reveals of long awaited characters making their return to the New 52. i won’t spoil them here but trust me they are big!

Yet, for all its great plot twists and character moments, Forever Evil has been, above all else, a Lex Luthor story.  Johns has managed to take one of the greatest villains in literature and make him into one of the most complex and interesting heroes of 2014. His quest to defeat the Crime Syndicate illustrated all sides of his personality. It plunged the depths of his megalomania, but it also opened a window into his valiant side. By highlighting both sides of his personality Johns has taken on the most well worn characters in comics and made him a completely fresh, unpredictable player in the DC Universe.

David Finch has never been my favorite artist, but in the closing issue of the event he shines the brightest he has in the entire series. I still have a big problem with the facial renderings of characters like Bruce Wayne and both version of Superman. (They are just too squished!) But I think his Lex Luthor is spot on, as are his takes on Bizarro, Alexander Luthor,  Sinestro and Atomica. He also does a fantastic job of depicting the varying power sets of the many players in Forever Evil #7.  The battle between Luthor (X2), Black Adam, Sinestro and Superwoman is especially dynamic. I must also point out the colors by Sonia Oback. Her muted, oppressive pallet perfectly captures the tone and tenor of the story and without it events wouldn’t land with the same force.

The only real criticism I have is that the release schedule of Forever Evil has diminished the narrative flow of Johns’ and Finch’s fantastic series.  The huge revelations of issue #6 seem like a long time ago and I couldn’t help but feel disconnected from the ramifications happening in this finale issue. But this is a problem of but a moment in time. In the future when new readers purchase the trade paperback or old readers pull out their bagged and boarded single issues there will be no gap and what they will read is one of the best and most interesting events ever released by a major comics publisher.

Buy It – With an interesting premise, a deep focus on interesting characters and real universe changing revelations, Forever Evil is the model of what all event books should be. Geoff Johns has once again proved he is the master of big comic book storylines and David Finch, while not aways my cup of tea, delivers some truly stunning visuals. This is a book that belongs up there with the Crisis storylines and is one you should not miss.