Okay, follow along with me here: there are a lot of comics out there. So many that none of us could possibly read them all every week. And so, we all have systems by which we decide what we read and what we don’t. We have favorite characters, favorite publishers, so on and so on. One of the largest factors in whether I will try out a book is the creative team. Favorite artist? I’ll give it a shot. Favorite writer? Even better. But, I think we forget sometimes that these creators are only people, and they hits and misses, ups and downs, just like everyone else. Unfortunately, I feel like The United States of Murder Inc. is largely a miss for Brian Michael Bendis and Michael Avon Oeming, who–though they have had a long history together on Powers–just can’t seem to connect. 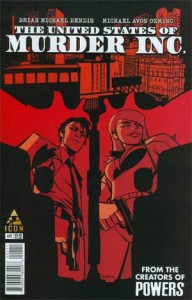 The story begins with young Valentine Gallo being sworn into the family–you know, THE Family. There is a big party after and the next day he meets with one of the family officers to get his first assignment as a made man. He’s to deliver a briefcase to a senator in Washington, DC. What’s interesting about this is that the area of New York seems to be something like a separate country from the rest of the US–referred to only as The Territories. And so, Valentine must leave the territories for the first time in his life and deliver this suitcase. He invites his cousin along and they take the train down to DC. Along the way they meet Jagger Rose, a female enforcer for the family who was sent along to keep an eye on Valentine. They reach DC, deliver the case, and everything seems to go smoothly, until the building Valentine just delivered the case to blows up, killing his cousin. Valentine blames The Family for setting him up, the officer he met with swears that it wasn’t the case that blew up, and so on. The book wraps up with Valentine’s mother dropping a huge secret on the young man, one which will make him question his whole life.

I have to say that the ideas in Murder Inc. almost make me want to keep picking it up, even though I found little else that I really enjoyed. It’s an intriguing premise, one that could make for a great story, but I’m not sure that this is that story. Much of the problem that I have with the book is that Bendis’s dialog doesn’t seem to match up with Oeming’s visuals. Bendis seems to be going for a hyper-realistic, vulgar, Scorsese-like mob story. Oeming’s art, in case you haven’t seen it before, is stylized, minimalistic, and heavy. It’s built more for urban fantasy than gritty realism, and the contrast of the dialog and the art kept me at arms distance all the way through the book. Also, I didn’t feel like any of the characters were well defined, either by writer or artist. They all felt kind of flat, which is hard to deal with in a book without major action scenes or explosions every other page. Don’t get me wrong, Oeming’s art is quite good in this issue. There is a full two page spread of the party that has this great wide angle lens look that I just love. Also, Taki Soma’s colors are rather brilliant, utilizing Oeming’s heavy blacks while also helping the reader by separating scenes with different dominant colors. Unfortunately, it just doesn’t all add together to make one cohesive book.

Skip it. To be fair, I’m not familiar with Powers–Oeming and Bendis’s other crime comic–and so I cannot speak to how fans of that work may react to The United States of Murder Inc. Maybe the contrast that bothered me is exactly why this combination of creators is appealing to others. But, for me, it was like watching Batman: The Animated Series with the Goodfellas dialog track playing over it. It just didn’t match up. And, unfortunately, I don’t see myself picking up issue two.