Now that I’ve read Hellboy in Hell #6, I just wanted to pop in and let you all know that I’m going on hiatus from reading or reviewing anything else until I have a chance to read the entire Hellboy back catalogue. Have a nice summer…. 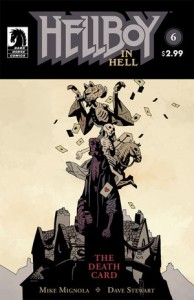 Okay, obviously I’m not actually going to do that, but in all seriousness, Hellboy is some next-level stuff. I used to say to my friends that Pink Floyd’s The Wall was the album that all other albums want to be when they grow up, and I feel the same about Hellboy, and especially about Hellboy in Hell. It would be nice if it came out more frequently, but as rich and gloomily beautiful as it is, I’m okay waiting.

Issue #6 is called The Death Card, and is another single issue, fairy tale style story that takes place within the Hell where Hellboy is stuck. The story begins with our hero having drinks with a couple of guys who claim that they have mapped Hell and who are also planning on writing a book on the history of the place. As they discuss, a figure approaches and asks for a hand of cards. Hellboy has a moment of recognition before the creature attacks him. They fight through the streets of the City of Hell while captions and quotes tell us the story of the Vampire of Prague. Hellboy experts will recognize this character as one whom Hellboy vanquished in the story The Vampire of Prague, collected in the anthology “The Troll Witch and Others” (which you can bet I will be reading over the weekend.) The Vampire tells Hellboy how his “death” set him free, allowing him to run amok in Hell. Fortunately, a new character comes along to temporarily dispel the creepy gambler. This new figure is a minister who spreads the word of God in Hell. He leaves Hellboy with some foreshadowing and prayer, at which point the book ends.

It’s been about five months since the last issue of Hellboy in Hell, which is okay since these last couple of issues have been basically stand-alone. However, I did find myself having to go back to my previous issues in order to understand all of what was happening in the story, and I recommend that other readers do too. You will get a lot more out of it. At the same time, I really like that Hellboy seems to be reliving some of his past exploits while he loiters in Hell. First, because that is traditionally what you do in Hell–relive your sins–and second because it gives me an opportunity to look back at the stories that I’ve missed and get caught up.

To talk about Mike Mignola’s art seems like talking about a master in mid-stroke, but if you haven’t seen Mignola’s Hellboy art before, you absolutely must, by hook or by crook. I realized while reading this issue why the Hellboy movies never quite rang right for me: it’s all in the visuals. When Mike Mignola draws Hellboy, there is an undeniable despair to the character, and to everything around him. He’s not Captain America or Wolverine–his signature pose is just him standing, shoulders drooped to the point of disappearing, smoking something and staring out at you, the reader, daring you to say something. Even when Hellboy is sarcastic or funny, there is always an air of sorrow to him that comes from the art, helped greatly by the excellent colors of Dave Stewart. In Hellboy in Hell, the visual representation of Hell is a silent, terrifying, and yet oddly beautiful and compelling place that holds new surprises and ancient curses around every corner. I’ve read issue six twice and flipped through it five or six times in the course of this writing, and I find something new and fascinating each and every time I open it.

Buy it. I’ve heard that Hellboy collected editions are something wonderful to have, with sketches and concepts and descriptions that the single issues don’t include. And, if you have the patience to wait for them, then so much the better for you. I, however, have some patience problems, and so I like to get the single issues. Either way, though, and whether you are an established Hellboy fan or not, this is one of the pinnacles of the art of comic books and should not be missed.