Story and Art by Naoshi Komi 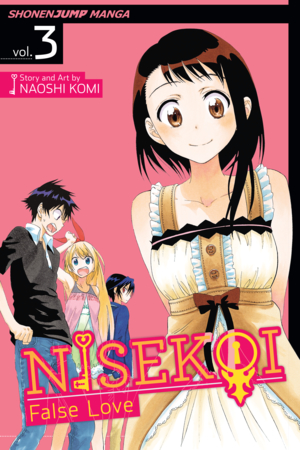 Raku Ichijo is the son of a yakuza leader. When a new gang moves into the area and causes trouble, he is asked by his father to pretend to date the daughter of the other gang’s leader. Chitoge Kirisaki is a beautiful girl with a violent, short temper who wants nothing to do with Ichijo. The two fulfill the wishes of their fathers through gritted teeth and passive-aggressive comments. The set-up wouldn’t be so bad if Ichijo didn’t have a lifelong crush on Kosaki Onodera, a kind, sweet girl in his class who has the same feelings for him. For the sake of the two gangs, Ichijo and Kirisaki must continue their charade.

Meanwhile, Ichijo carries a locket around his neck, a symbol of a promise he made ten years ago to a girl his age. The promise? To marry the girl who has the key to the locket. The catch? Dude can’t remember for the life of him who that girl was. Kirisaki, on the other hand, made a promise to marry a boy ten years ago. Of course, she can’t remember the name or face of the boy.

Volume three kicks off with Ichijo and Tsugumi, Kirisaki’s body guard and childhood friend. Tsugumi appears to be a boy, but a fight with Ichijo reveals that he is actually a she. The love triangle becomes even more convoluted as Tsugumi begins to embrace her femininity and develops her first crush.

Despite their ill feelings towards each other, Ichijo and Kirisaki occasionally demonstrate concern for the other’s well-being. Ichijo comforts Kirisaki when she is afraid of the dark, and Kirisaki repairs Ichijo’s locket after he loses it. Their total hatred towards each other begins to disappear as they let their guard down. Kirisaki even attempts to make porridge for Ichijo when he is sick – a kind gesture that doesn’t have the intended effect.

As with many manga series that features high school students, there is a class trip, complete with a visit to a hot spring. Teenagers and public bathing? Just imagine the comedic antics Ichijo and Kirisaki get into when Ichijo ends up in the wrong side of the fence.

Nisekoi is a fun read, full of drama and situational comedy. There are a lot of characters in this series, and not all are fully developed. Ichijo seems singularly focused on finding the identity of the girl he promised to marry with little character development outside of that factor. Kirisaki, on the other hand, begins to embody the tsundere trope. Her hard exterior chips away to reveal a girl who slowly appreciates Ichijo. Nisekoi is truly a study in how two people slowly grow to like each other. It’s easy to root for these two main characters to be together while also having strong feelings for characters like Onodera and Tsugumi to find true love as well.

As a lover of cutesy manga with lots of love triangles and yearning, Nisekoi: False Love volume three is right up my alley. The pacing of the story is great; readers see how Ichijo and Kirisaki slowly grow to tolerate each other’s presence with it being too fast or too slow. The story gives readers just a snippet of romance, such as Kirisaki’s heart beating faster when Ichijo reaches for her hand, Ichijo’s cold sweat when he’s near his crush Onodera, and Tsugumi’ pained confusion over who she likes, without it being over the top. The first three volumes of this series are available – be sure to check them out!