Thursday of this last week we got wind that Agents of SHIELD has been renewed for a second season. Though almost all TV wonks and scholars believed that this renewal was inevitable, it’s still nice to see that the show, which started off bumpy both in ratings and critical acclaim, will be getting another lease on life. Ratings have been steadily rising over the last couple of months, especially in the wake of Captain America: The Winter Soldier, the events of which had a direct and immediate impact on the show. After last night’s raucous season finale, it’s nice to know that there is more SHIELD to be had. 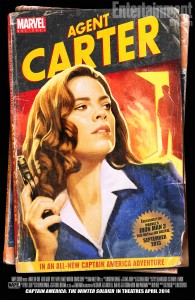 The more interesting tidbit of news out of Marvel TV, however, is the half season order for a show focused on Agent Carter, played by Hayley Atwell in the first Captain America movie. There hasn’t been a lot of additional information released about this series, only a short synopsis and an image. If you’ve seen the Agent Carter One-Shot that came as a special feature on Iron Man 3, then you’ve got a pretty good handle on what the show will be about, as far as I can tell. If you haven’t seen it, I highly recommend it. In essence, Agent Carter finds herself still working in the SSR after the events of Captain America: The First Avenger, but with all the men returning home for the war, she’s being treated like a common secretary. But, there are some who will not forget her contribution to the SSR and what a badass she is. So, she finds herself a glorified secretary by day, a covert operative and SHIELD co-founder by night. I, for one, am very excited to see what could come of this show.

Here’s what makes me excited about Agent Carter: first, Hayley Atwell will be returning to the character. I can only cross my fingers and hope that Dominic Cooper will be available to reprise his role as Howard Stark, but Atwell is the most important get for the series. Also, with as much as has been made lately on Agents of SHIELD about the Howling Commandoes and Triplett’s grandfather, Gabe Jones, there is a lot of potential for crossover in the Marvel TV universe as well as more potential in the Marvel cinematic universe. I, for one, would love to see more about the old spy days of SHIELD, sort of a Marvel version of Mad Men and James Bond all at the same time. Finally, there is the possibility of creative programming. When the Agent Carter TV series rumors first started, there was some chatter that Marvel might mess around with airing Agent Carter and Agents of SHIELD in some kind of one-or-the-other fashion. Meaning that maybe we would get a few weeks of SHIELD, then a couple weeks of Carter, then more SHIELD, and so on. We could even get a half season of SHIELD, then the half season of Carter, then the rest of shield to finish out the block. I like this idea because the frequent breaks in the first season of SHIELD were quite distracting, even though we now know that much of that delay was built-in to allow Captain America to release before the show went into it’s final clutch of episodes. No matter how they air it, however, I think both season two of SHIELD and Agent Carter will be a lot of fun to watch.

Thanks for reading! Now, go get some comics!