It came and it went, it was only an hour, and holy cow was there a lot going on. The season finale of Agents of SHIELD brought many of the open story threads to a close while giving us a solid idea of what to expect in the recently confirmed season two. With lots of great lines, several very satisfying scenes, and a couple of great fights, SHIELD ended on a definite high note, and I can’t wait to get to watch the whole thing again once the DVDs come out. 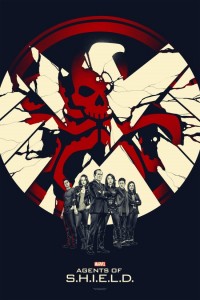 This final episode begins in what looks like the world’s most boring start-up-gone-corporate. The boss is giving the new guy the tour, during which they mention “The Incentives Program” in hushed, reverent tones. Turns out this is a Cybertek facility dedicated to the operation of the new HYDRA super soldiers. The whole place jumps into action as Coulson’s team gets ready to square off against these hyped-up science experiments. Cut back to Cuba, where Coulson’s team is doing that for real. There is a witty line or two and then they jump into action. May really cuts loose and takes most of the robots out single-handedly while Skye plants the thingy that lets her track Garrett. Speaking of Garrett, we check in with him next as he goes very crazy very quickly after being pumped full of “Jesus Juice” last episode. Not only is he super strong, he’s also gone all writing-things-too-quickly-on-strange-surfaces crazy with ideas. And it’s oddly terrifying. Next, we check in with Fitz and Simmons who are stuck in a metal container at the bottom of the ocean. What this episode does so well is remind us why Fitz is even around: he’s crazy smart. He lays out the situation for us right before we cut back to Coulson’s team to realize that there is no way they are going to be able to find the geniuses. They have Garrett in their sights, and they can’t let him get away. And all of that was just up to the first commercial break!

I want you all to be able to watch the episode on your own, so I won’t say much else, but this was the finale that the show desperately needed. Some seriously emotional stuff between Fitz and Simmons, all the funny that you can handle with Triplett and Coulson, the fight between May and Ward that we’ve been waiting for, and a seriously great time spent with Nick Fury, and this might be my favorite episode of the whole series. What’s even better, though, is that the show left as many threads hanging as they tied up, so that I feel like I know where things will stand at the beginning of next season. Trophies for this episode go to Fitz, who got his groove back, Ruth Negga as Raina, who turned what could have been some seriously gnarly dialog into poetry, and Triplett, who needs to come back next season as a regular even if I have to start a petition.

Now that we know for sure that there will be a next season, I want to just take a look at what we might expect. Deathlok will definitely be making a return, as will Ward. I was surprised, however, at how Ward ended: I expected a bit more ambiguity. Raina and Quinn will also be big in season two, as will one particular element that is still floating around out there. Instead of being charged with fixing all of SHIELD’s messes, as I was expecting for Agent Coulson, Fury gave the man the keys to the kindgom and asked him to rebuild his church from the ground up. It looks like we get more Patton Oswalt going forward, which can only be good, and we get a little glimpse into what Coulson might have in store for himself. All in all, it was enough to make me very excited for the next season, which was something that I was sorely missing in previous episodes.

Watch it! The finale was just about everything I could have hoped for, including some much needed bolstering of Fitz, the aforementioned second season teasers, and some very satisfying confrontations. I’ve said this before, but I think the whole first season will play much better now that we all know where it was going, and so I’m looking for some solid replayability on home video. And, I’m very much looking forward to checking back in with Clark Gregg and the gang in the fall when Agents of SHIELD returns!

I want to thank all of you for reading my reviews for the past couple of months. I’ve really had a great time writing them and doing the live tweeting, and I’m looking forward to picking it all back up next SHIELD season. Please feel free to comment on the episode or the season in general below–I try to reply to all comments. Thanks for watching!