Contrary to the beliefs of some, horror fans are some of the smartest people you’re ever going to meet in the world of genre fandom.  Many terror aficionados have the uncanny ability to take a horror story (whether it’s a film, television show, novel or comic) and break it down to its barebones with a single viewing.  We can find references to other works, genre conventions, and thematic influences quicker than you can say “decapitation,” and can debate for hours on end about the importance of horror in our society or the relevance of any particular piece of work.  But if there’s a characteristic that most horror fans hold, it’s this: we can spot a faker (someone trying to cash in on the genre) from a mile away.  Well rest assured folks, Joshua Williamson is not a faker. He’s a bonafide fright fiend, and Nailbiter #1 is here to prove it. 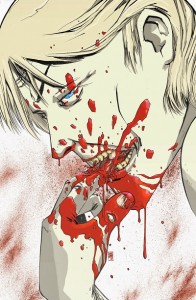 Nailbiter opens with the arrest of Edward Charles Warren, a particularly nasty serial killer who kidnaps and murders individuals who bite their nails.  And as the cover of the book illustrates, he also has a penchant for chewing his victims’ fingers until they’re nothing but bloody stumps of bone. Fast forward three years and we’re introduced to Finch, a federal agent whose quick temper has landed him into some trouble.  Suspended from his job and contemplating suicide, Finch receives a call from Carrol, one of the officers responsible for capturing Warren.  It seems he’s been trying to unlock the secret of Buckaroo, the place Warren grew up in.  A quiet little town that has spawned 16 of the world’s most sick and depraved serial killers, the most recent being the Nailbiter.  Carrol believes he’s figured out what’s made this quiet piece of America such a hotbed for homicidal maniacs, but he needs help to expose it.

Joshua Williamson’s love of the horror genre is as plain as the lack of a nose on a skeleton’s face, and his influences are evident in this first issue. Obviously there are the two mentioned in the book’s synopsis, Twin Peaks and Se7en, the latter being the most noticeable thanks to the dreary, dirty, and claustrophobic atmosphere created by the beautiful combination of Mike Henderson’s artwork and Adam Guzowski’s colors. However, hints of other possible inspirations are peppered throughout Nailbiter. The introduction featuring the excerpt from the “Buckaroo Butcher #16” case card reads like the intro to the Texas Chainsaw Massacre, so much so that you can practically hear that narrator’s voice in your head.  Another comes in the form of the Book Burner’s mask, which is reminiscent of Jason’s in Friday the 13th – Part 2, or even the killer’s hood in The Town That Dreaded Sundown.

Horror fan cred aside, what really impresses when reading Nailbiter #1 is Williamson’s expert pacing of the events in this first issue. As displayed in his other books, like last year’s breakout smash Ghosted, he has an admirable amount of restraint when it comes to setting the tempo of the story and its action. He eases you into this new world, deceptively giving you enough information about its players that you think you know what they’re all about, while also surrounding them and their setting in mystery.  The shadowy world of Buckaroo feels like a place you’d visit in a dream (or nightmare), and immediately grabs your attention.  And damn if Williamson doesn’t know how to end an issue.  If you’re not frothing at the mouth for Nailbiter #2 by this debut’s final page, then (as the old saying goes) check your pulse because you might already be dead.

Buy It – If you’ve been wondering what all the buzz around Joshua Williamson is about but haven’t checked out his work, Nailbiter #1 is a great introduction to his style of storytelling.  It’s a killer first issue, showcasing some interesting characters, a fantastic setting, and a truly unique concept that will certainly take us to some dark places in issues to come.