So I just went through the archives and it doesn’t look like we at Talking Comics have had the chance to review Rick Remender’s dark science fiction drama Black Science. As such, I’m going to go back a bit and talk about the series as a whole before jumping straight into issue #6, which is something of an ending to the first arc of this fascinatingly twisted story. 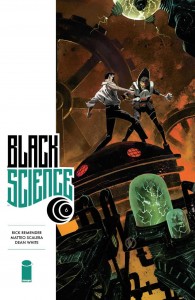 Black Science is about a group of fringe scientists who call themselves The Anarchist League of Scientists, led by Grant McKay, who create a machine that will punch through alternate universes. Issue one begins with Grant and his team hip-deep in a life or death struggle to find their way home from their first attempt to use the machine. The Anarchists call it the Pillar–the machine that transports them around what they call the Eververse. The pillar has been sabotaged, and neither can they control it nor can they stop it. The whole thing is sort of like Quantum Leap, but with alternate universes, most of them scary or deadly or both. Remender also has a kind of Walking Dead attitude toward his characters–at least three have died in these first six issues. It’s a gruesome business, stepping out of your universe, and the Anarchist League of Scientists is paying for their hubris.

In issue six, Grant fights with Kadir, the man who funded the pillar project, in the middle of a temple populated by oversized, intelligent monkeys. The two of them have only minutes to return to the pillar before it jumps, and both are determined that the other will not make it. As they scrap it out, another fight takes place around the pillar itself as Grant’s foul-mouthed, teenage daughter tries to leave so she can rescue her dad. One of the strangest things about Black Science is the morality of it. The characters themselves seem to have little in the way of professional ethics or even common human decency, but when it comes to Grant’s kids–who are stuck on this expedition with the Anarchists–no price is too high to keep them safe. Not one character, no matter how duplicitous they turn out to be, ever says, “Forget the kids, I’m saving myself.” I’m not sure how I feel about this choice, however. On the one hand, it keeps any of the characters from becoming the sniveling, Doctor-Smith-from-Lost-In-Space character. On the other, it just seems wrong: you would think that facing death on a far flung dimension where electric frog people ride on the backs of giant flying turtles would break down the chivalry of just about anybody.

One of the coolest moments in issue six is when Grant and Kadir end up in the chamber of a monkey wearing some very sophisticated equipment and brandishing the symbol of the Anarchist League of Scientists. This isn’t the first time we’ve seen another version of Grant in the series, but it’s certainly the first time that the circumstances of a dimension have been so drastically different and yet still produced a recognizable character. The rest of the issue is seriously spoilerific, but I will say that it’s very well written and wraps up this first “act” or “season” of Black Science quite well. I will have trouble waiting until July to get the next part of the story.

I can’t help but compare Black Science to some of the other sci-fi titles I’m reading right now and note the profound differences. This is certainly the best written book I’ve read from Mr. Remender since Uncanny X-Men ended, but it’s also wholly unique from anything else out there. Manhattan Projects has a good deal of humor, but can’t muster the same amount of action and tension that Black Science does. FBP contains some of the same ideas, but doesn’t have quite the same level of imagination of Black Science. And so on, and so on. Though it has a couple of small problems–like the kid issue I talked about earlier–Black Science is a unique and well produced series that I hope will only get better/weirder as time goes on.

One major thing that sets this book apart from others is the art. Matteo Scalera does an excellent job with every aspect of this book, from the faces to the settings. I can only imagine what it must be like to be an artist and get a script like Black Science coming across your desk–never really knowing what to expect from one issue to the other. This month it’s giant monkeys, last month it was Native American spaceships, before that, naked fish women dancing for the enjoyment of their frog overlords. I imagine it must be both terrifying and exhilarating. Not enough can be said, however, about the painting art of Dean White, which is just as integral to Black Science‘s individuality as Scalera’s pencils. It says a lot that White’s credit in the book says, “Painted Art,” and not “Colorist.” I would love to know exactly how he creates the look of this book–whether he uses physical or digital painting, for example–but the finished product is gorgeous, messy, moody, and striking in every issue.

Buy it. As with so many Image titles right now, you may be better off waiting for the trade on this one. The story is quite complicated, and I believe it reads better all together. That being said, there is something in the paper stock and printing of this title that lends itself to single issues. And then there are the covers–they remind me of pulp sci-fi novel covers from way back when, but with Scalera’s dramatic figures and White’s beautiful painted colors. Every one is a joy to look at. But, however you get it, Black Science is definitely worth your time, especially if you like the weird and dark world of fringe science.