It’s getting harder and harder for me to refrain from making direct comparisons between Dan Slott and Mike Allred’s Silver Surfer and the popular British television show, Doctor Who. And you know what? I’m okay with that. I’m a huge fan of the later, and after issue #2, I am now a true believer in the former as well. 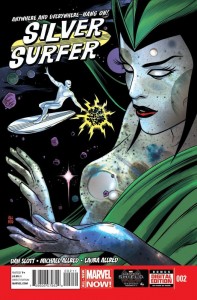 Issue #2 of Silver Surfer begins with a very brief interlude into the life of Dawn Greenwood and her twin sister before throwing us right back into the story at hand. The Silver one has been given an ultimatum: help out the Impericon–a giant space amusement park–or they will destroy the one person in the galaxy who is most important to him. What’s odd, however, is that the Surfer and Dawn–his most important person–have never met. The Surfer, however, is a hero to the core and decides to help the Impericon as well as Dawn. To do so, he must stop the Never Queen in her attack on the Impericon. The Surfer then flies off to confront the Queen of Nevers. After a brief conversation, he realizes that things are not all as they seem. Meanwhile, Dawn–who has been locked up in the Impericon holding cells–starts to get to know her fellow inmates, and eventually formulates a plan to escape via a fairly violent and destructive gastrointestinal reaction. Once free, the inmates try to make it to some kind of escape vehicle, and in doing so, they pass through the main reactor core. They discover, as the Surfer has discovered, that the Impericon is powered by the heart of the Never Queen. The Surfer, noble as he is, decides that he must put all this right, and as such he returns to the Impericon to free Dawn and return the heart of the Queen of Nevers. Once there, the Surfer and Dawn run into each other with an uncanny speed that borders on fate. Little do they know, however, that the proprietor of the Impericon, Incredulous Zed, is on his way to take care of the Never Queen himself!

In my review of issue one, I was a bit on the fence about this title. The obvious Doctor Who feel was off putting, and the extreme quirkiness of the story made it hard to get a hold on. Well, with issue two, I’m hooked. This is just the kind of science fiction that I love: quirky, imaginative, a little mind bendy, and all kinds of fun. What I really enjoy about the book that sets it apart from something like Doctor Who, however, is the Surfer himself, who is like the universe’s biggest straight man. To him, this isn’t a lark or a frivolous adventure, but a serious rescue mission and a matter of honor and redemption. His whole attitude creates a wonderful contrast to the look and feel of the book, and will also do the same with the personality of Dawn once the two of them get to spend any time together.

It’s no secret that I love the art of Mike and Laura Allred, and there are certainly no exceptions here in Silver Surfer. In fact, I think they’ve outdone themselves. With each issue the aliens and monsters get more and more interesting and outlandish, and yet the Allreds depict every panel with a grace and fun that no other book can capture. I can only hope that the Allreds can continue on this book for a good long time and bring us many more alien landscapes and faces.

Buy it. I wasn’t sure about this title after issue one, but as I’ve said, issue two brought me right around. Silver Surfer is the kind of fun and freaky sci-fi that I love, and I think many other sci-fi fans will feel the same. My only problem with it now is that it’s just not long enough!