The Amazing Spider-Man 2 picks up as Peter and Gwen are graduating from high school. While largely assumed after the end of the first movie, the two have rekindled their relationship. Despite all the action and introduction of new villains, it is the relationship between Peter Parker and Gwen Stacy that is the heart of this film and the thread that ties it all together. 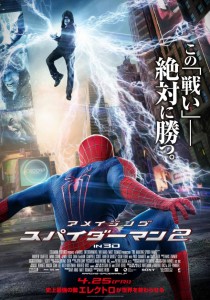 Andrew Garfield (Peter Parker/Spider-Man) and Emma Stone (Gwen Stacy) once again have fantastic on-screen chemistry, and that is most likely due to the fact that they are an actual off-screen couple. These two aren’t acting like a couple in love, because they are a couple in love. Even when they are not sharing scenes together the two own their roles. Stone shows us just how strong of a character Gwen can be, and she calls her own shots. She proves once again why Peter was Midtown High’s number 2.

The film feels very much like a comic book, and that is probably because we get a lot of Spider-Man in this film, and multiple villains. I never got the feeling that the film was overcrowded. The way the film is paced and laid out is similar to a multi-issue story arc in comics. There are events and threads that carry over from chapter to chapter, but there are also those that get resolved or placed on the back burner. While the villains may all be after Spider-Man, their motives are what fundamentally set them apart from each other.

Dane DeHaan (Harry Osborn) delivers a balanced performance offering up a character that is both sympathetic and creepy, which is not unlike his character in Chronicle. Garfield and DeHaan played well off each other and felt like two childhood friends reunited. The only shame is that there was not more time with the two of them together hanging out as friends. Looking at the story as a whole though, shows us that this isn’t a story about Harry and Peter, but about Gwen and Peter.

Electro (Jamie Foxx) was the first villain announced for the film, and has the most screen time. My wife commented as we left the theater that he didn’t seem like Jamie Foxx. Anytime you can look at a character and not see the actor is a good thing in my book.

The action sequences between Spidey and Electro were some of the more intense in the film. Everything was fast paced, and throughout the film we were shown just how quick thinking and strong Spider-Man is. Electro moved with the speed expected of someone composed of electricity that often just cannot be seen in the static pages of a comic. The effects artist did an amazing job bringing him to life on the screen.

It’s not all larger than life super villains, though. There are plenty of friendly neighborhood Spider-Man moments interspersed throughout the film to keep the lightheartedness that is often omitted in the genre. Spider-Man is a symbol of hope and inspiration for all people and the film constantly reminds us of this. Peter Parker is also nothing without the people in his life. There is a very emotional scene between Peter and Aunt May (Sally Field) that encapsulates just how much they mean to each other. It was a great representation of the relationship they share in the comics.

The only thing about The Amazing Spider-Man 2 that I didn’t particularly care for was the connection being made between the current events in the story and Peter’s father. It seemed a little forced and unnecessary. It just makes everything feel way too coincidental, even for a superhero movie.

The Amazing Spider-Man 2 is a must see. Even though we are introduced to three different super villains the film does not feel crowded. It is paced like a multi-issue arc in a comic series with an overarching theme and story. This is a story about Peter Parker and the people in his life. It is a story about love. It is a story about inspiring hope in others. It is an Action-Romance. (There are also a ton of Easter eggs hidden through out so be on the look out.) 9 out of 10!

The Amazing Spider-Man 2 opens in theaters across the United States on May 2, 2014. Check your local listings for showtimes.

Be sure to check out the Talking Comics forums and tell us your thoughts about the film. We’ll be having a more in-depth conversation there to discuss the finer points (aka spoiler territory) and get nit-picky. If you stop by and comment by May 16, 2014 you’ll have a chance to win a Japanese The Amazing Spider-Man 2 flyer, which works awesome as a mini-poster.