I’m going to go ahead and rip this band-aid off quickly: Justice League United is not good. I don’t know what I was expecting, but it certainly wasn’t what I got. I wanted to chalk some of the issues I had with the book up to it being a zero issue, but the title block inside the book says that this is part one of five of the Justice League Canada arc. So what happened? I can’t say for sure, but I can point out some problems. 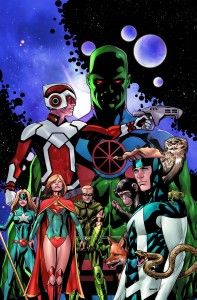 The first few pages show the end of the story, featuring Star Trek worthy aliens, some kind of blue baby, and the assembled Justice League United. We then flashback three days to an event in Toronto where Animal Man and Stargirl are signing autographs. They are confronted by Adam Strange–who gets a pass to show these two celebrities dangerous object based solely on his cool name–who asks the heroes for help with an unexplained archeological mishap that he was a part of. After presenting his evidence, the heroes decide to help him, and head out into the snowy wilderness to check out the scene of the excitement. Animal Man catches a scent and follows it to what looks like a mass grave when the group are engaged by hostile aliens. Suddenly, we are yanked out of that story to get a four page pseudo-origin for Lemire’s newest hero, Equinox. Then, just as suddenly, we’re back with Animal Man, Stargirl, and Adam Strange getting their butts whooped. Green Arrow and Martian Manhunter appear on the scene, summoned by Stargirl back in scene 2, and the odds seem to even. Martian Manhunter then discovers the source of the aliens, but not before any remaining crew can teleport away. They leave the heroes a giant fire beast to fight, however, so that’s good. The issue finishes with a quick meetup with the big bad and the new Lobo, who is apparently going to go toe to toe with Hawkman in the next issue. Some one will have to let me know how that goes.

I know that Jeff Lemire is a great wrter. I have the proof of nearly thirty issues of Animal Man and more than a dozen issues of Green Arrow that have all been excellent. What I don’t understand, then, is what happened with Justice League United. Not only is the plot weak, but the characters are weak as well, including the two characters I just mentioned. How a writer like Lemire writes a character like Buddy Baker, aka Animal Man, for 29 issues and then cannot write him in a team setting, I just don’t understand. I beginning to think that the Justice League titles are cursed.

The art in this issue, similarly, does not cut the mustard, in my opinion. Many of the faces have a strange, wide-eyed quality that can be off-putting. The figures and backgrounds are mostly good, but so many of the characters’ faces either have an odd expression or just don’t work at all. I also noticed that while the colors in the issue are mostly good, several panels throughout the book do this odd, sudden shift in coloring in order to emphasize the action in that panel. If you’re reading Green Arrow, these panels will look familiar, but without Andrea Sorrentino’s excellent panel layouts, the effect seems like a cheap knockoff of that book.

Skip it. Just don’t even worry about it. I was hoping that maybe this title would be able to bring me back into the world of DC and the Justice League, but no such luck. If you want to read Jeff Lemire’s work, check out Animal Man or Green Arrow. Heck, even his work on Justice League Dark is better than this. I don’t know what happened here, but there are better examples of comic book story telling all over the shelves right now. Pass Justice League United by.