I’m not sure if it’s just the time of year or if Marvel and DC are trying to capitalize on all the movie hype lately, but all of the anniversary and anthology issues lately are starting to wear on me. Case in point, Guardians of the Galaxy #14 is an oversized book in celebration of the title’s 100th issue–which in reality is it’s 101st since they needed to wrap up The Trial of Jean Grey last month. Some of these anniversaries have been quite good, while others haven’t really been worth the cover price. Guardians is uncharacteristically somewhere in the middle. 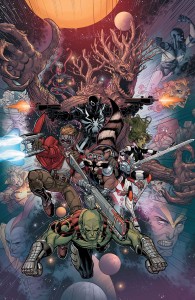 The story begins with Peter Quill lying in his bunk, thinking about all of the various ways in which sleep is difficult in space. He’s interrupted by Rocket Racoon, who lets him know that they are under attack by the Spartax empire. Rocket, Groot, and Peter then try to escape their fate, to little avail.

Cut to Gamora, who is also under attack. She’s being chased by an old foe, and finds herself incapacitated. Meanwhile, Drax and Venom (yes, Venom–more on this later) shop the bazaar at Knowhere to look for a gun for Venom that won’t embarass him out in the wide universe. I haven’t read any books with this version of Venom, but he sure does whine a lot. Part of the story seems to be about how everyone in the universe other than Eddie Brock knows about his symbiote, and he’s not happy about it. But then, as is the pattern, Drax gets kidnapped by an unknown force.

Finally, we get some answers as to what is going on. Peter wakes up in a room on Spartax and has a discussion with his dad about what a terrible dad he is. Of course, Peter thinks his dad is a jerk and a warlord, and the King believes that his son is a brat and a fugitive. He’s the one who has orchestrated the capture of the various members of the Guardians. And, of course, he plans to put Peter on trial for his crimes, and believes that no one will come to rescue him.

The backups consist of an excellent origin story for Groot and a look to the future of the Guardians of the Galaxy–a thousand years into the future to be exact. The future Guardians story is interesting and decently told, and I’m sure will have bearing on the series going forward, but also have some design issue.

For the most part, the story is solid. However, for as good as Guardians has been, there are a couple of issues with this book. First, I didn’t expect the story in this anniversary issue to be so integral to the series. Usually, these anthology style books have one-and-done stories that don’t really go anywhere. The second, and largest, issue for me was Venom. Looking at the recap page, there is one small blurb about how the Avengers have placed Venom with the Guardians as a sort of ambassador. Not only does this not really make much sense to me, but it was completely out of the blue. I’ve been reading Guardians since the first issue of this current series and to open the book and have no idea what’s happening was more than off-putting. Now, I did find out that–according to Brian Michael Bendis’s tumblr–the Venom problem will be addressed in the Guardians book that will come out next weekend for Free Comic Book Day. That being said, I would recommend that if you haven’t read issue #14 yet, you might wait until you can read the Free Comic Day issue first. Hopefully, things will make a lot more sense.

The art is my other problem with this book. The main story is good up until the conversation with King Spartax and Peter Quill. Whoever drew this portion does not have the command of facial expressions to carry a dialog heavy scene with no action like this. And unfortunately, with as much exposition as is in this scene, the problem with the faces creates problems with the story. Art in the rest of the book is okay–the highlight being the Groot story penciled by Phil Jimenez. The final, furure story, has a Joe Maduiera/Humberto Ramos look to it, but the heroes themselves look like they came right out of a 90’s Image title. All-in-all, the book itself felt rather mediocre.

Wait and see. If you’ve been reading Guardians and want to keep doing so, you really need to read this issue. It’s just that important to what is happening with the team. It might also be a decent jumping on point for readers who didn’t want to participate in the Trial of Jean Grey. However, I want everyone to know that issues of the Guardians are usually a lot better than this, and tread carefully with the Venom problem. This issue paired with the Free Comic Book Day issue will hopefully paint a more complete picture of where the team is right now and going forward.