While my wallet is clearly not amused by Batman Eternal’s weekly releases, I have been enjoying it. I’m reminded of the many stories that would continue week to week across multiple Bat, Super, or Spider titles in the 1990s, except Batman Eternal isn’t hijacking any other series I am reading, or forcing me to pick up tie-in issues of a series I don’t read. I like that. Nice move DC. 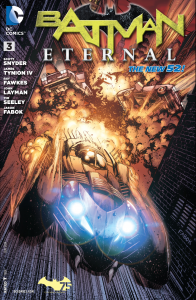 Issue #3 expands the narrative and introduces a pre-Spoiler Stephanie Brown into the New 52. I am a huge fan of Chuck Dixon’s run on Robin, and Stephanie Brown was a pretty big part in Tim Drake’s life. It is great to finally see her returning to the universe. This issue is beginning to show us her origin, and so far it looks fairly similar to her old origin. So for long time fans of Miss Brown, the more interesting tale may lie within the rest of the pages of Batman Eternal, at least for now.

The issue is keeping the pace set by the first two issues, and events are chugging right along at a Goldilocks pace; it’s not moving too fast, and it’s not moving too slow. There are a lot of different threads spooling out of the story, but Snyder and Tynion are hitting the beats. A little more revealed is each issue, as we move towards the events in Batman #28 and the opening pages of Batman Eternal #1. We readers know that things are gearing up to “fit-hitting-shan” levels, but just how fast and when it happens is part of the draw that makes Batman Eternal an exciting read each week.

Jason Fabok is also smashing it on art, and Brad Anderson is bringing it alive with his colors. Fabok had a long run in Detecive Comics, and knows a thing or two about Batman and Gotham City. This is a spectacular looking book. Since this is a weekly series it has me worried about the inevitable artist shift. We can only hope the fill in team is running on all cylinders. If DC is playing it smart they’ll keep these boys on the series for as long and as often as they can.

Buy! The pace is not slowing down in Batman Eternal. Stephanie Brown is also back, which has me pretty excited about a DC series again. So pick up this issue and read it while you eat your morning waffles.