When taking over a title mid-stride, most teams seem to take one of two paths with their opening steps.  Quick establishing stories to acclimate themselves as well as the reader to the new status quo and style, or long-term seeding for future themes and storylines that intersect and expand as the title picks up speed to a climax.  Neither can be claimed as the ‘right way’, but as Jensen, Venditti, and Booth begin their journey alongside The Flash with this week’s #30, it’s easy to see that they are approaching this in a long game fashion.  But when your titular character can cover as much ground as Barry Allen, it’s going to take a field that spans decades to keep the race going. 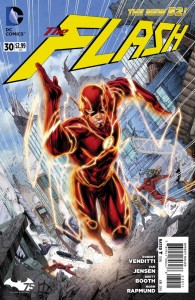 The horrors of Forever Evil have come to a close, and the citizens of Central City now struggle to return their lives to normalcy as a less-than-normal Barry Allen looks to do the same. With the guilt of his ineffectiveness throughout the crisis weighing him down, can he find a way to keep moving forward when the city may need him the most? Meanwhile, twenty years into the future, a very different Barry Allen looks to the past for the answer to his own guilt.  But have the dangerous lessons of tampering with time been forgotten?  And what role does Wally West have to play in all of this?

Van Jensen and Robert Venditti are no strangers to picking up fan-favorite characters after celebrated runs, having recently launched their followup to the highly-praised ‘Johns-era’ of Green Lantern with a new era of their own.  Now, taking the reins from the highly stylized Manapul/Buccellato stories that preceded them, they appear to have followed the same tactic that is working for them there.  Fans of the long play story, this first issue sets up a lot of future conflicts and mysteries that will easily keep the momentum of the book moving forward.  Even with story-seeding taking center stage, there is also a large focus on the humanity and characterization of Barry Allen that acts as a decent counterbalance to the deluge of mysteries in the issue.  Showing how much the citizens of his city mean to him, and how his concern can border on an Atlas-esque obsession to take their problems onto himself, works to establish a set of themes that the creative team look to explore with this story.

But this creative team has another set of shoes to fill as well, as their predecessors artwork was lauded as the best aspect of their run.  Stepping in on that front is Brett Booth; who quite obviously has brought his own vision to the series that is a bit less experimental in layout, but successfully injects a palpable kinetic feeling into the character himself.  With dynamic and energetic scenes of The Flash doing what he can juxtaposed against the quieter moments of Barry Allen, there is a sincere capture of motion that allows the panels to breathe life into each page as a singular flowing piece.  While I do miss the creative layout designs of Manapul and Buccellato, the easy to follow direction of the page is almost a necessity to fit with the bombastic motion being done, and it is utilized to great effect.

Even with all of the above, one cannot sprint without taking at least a few stumbles along the way, and this initial issue did hit a few bumps on its path.  Taking the long approach left me feeling curious about a few aspects of the story, but shy of overwhelmingly excited for the next chapter itself.  I’m comfortable with their style from the Green Lantern books, and as such am aware that all of the small things will payoff as the plot progresses, but this may stunt some of the excitement for new readers.  Additionally, while Booth shows a wonderful aptitude at capturing the motions of the world, the emotional resonance of his facial expressions do leave a little to be desired.  This was especially highlighted by the crux of the issue hovering on the torment that Barry is feeling, but hopefully as Booth gets more accustomed to the characters there will be a bit more variety in this approach.

Buy.  While a few hiccups are present, The Flash #30 gets out of the gate on solid footing with a clear path ahead to its next destination.  Vibrant, energetic, and still a little playful even in his current dour mood, it sets the stage for the type of Flash stories that look to entertain in high-octane fashion.  Now that it is off the blocks in a Flash, we should see more substance as the story continues to build off of the mysteries started here.